One of my first sour beers was inspired by Lost Abbey's (Pizza Port's) Cuvee de Tomme, their Belgian Strong Dark aged in bourbon barrels with sour cherries and Brett.  My results were great, the subtle dark malt mingling with the bourbon on the tongue, while the cherries and funk came through in the aroma.  After drinking the last bottle of it I decided I had to brew something similar again.  With my Pannepot clone on the schedule I thought I'd take half the batch and give it the same cherry/bourbon/funk treatment.

Earlier this year De Struise released a funky barrel aged version of Pannepot called Pannepot Wild, haven't had it, but it gets mixed reviews (at least compared to how well their other beers are generally rated). 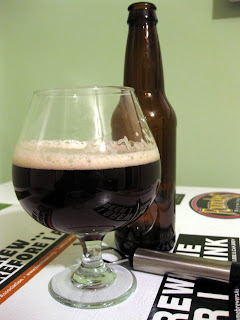 Appearance – Appears an opaque reddish-brown in the snifter, but clear amber-orange when held to the light. The head is slightly off-white, with tight bubbles that have good retention.

Smell – Macerated sour cherry and vanilla, with just a touch of earthy funk. The sour cherries come through much better than the sweet cherries that I used in the previous version.

Taste – Bright cherry tartness, but not enough for me to call it sour. The malt/beer character comes through in the vaguely sweet finish, lingering briefly before the cherries return. The cherry is deep and complex, with a bit of almond from the stones. The alcohol doesn't really come through despite the 11% strength. I would have liked some more dark sugar/malt character, but some more age may bring out additional complexity.

Drinkability & Notes – Turned out well, well balanced for such a strong beer. The base beer was more fermentable than I expected and I waited until secondary to add the bugs so it didn't end up as funky/sour as I wanted, but it is still really good as is.  It should age well since it has bugs, dark malt, fruit , and loads of alcohol, which should all either help to reduce oxidation or promote positive flavor development.
The Mad Fermentationist (Mike) at 6:28 PM