Out of the six beers I entered in the first round of the National Homebrew Contest only my Berliner Weisse was selected to move on to the next round. In the East region it had scored a 40.5 and won its category, but against 29 other great sour beers I was doubtful that it would have the same luck in the finals.

It only takes one bottle to enter the first round, while the final round requires three.  Sadly after the first round I was down to my last 12 ounce bottle (being such a low alcohol beer I put most of the Berliner into bombers and 750s).  As a result I needed to re-bottle some of the beer before submitting it.  I had split off a portion of the same batch and added Cabernet juice.  The grape character was very light and after doing a few test blends, I decided to blend in a small portion (~25%) of the fruited version for added depth and complexity.  This ratio works out to about 3 oz of grape juice per gallon, for the blend I submitted.  I took the simple approach to re-bottling, getting everything cold/wet and pouring into the new bottles (not much foaming so I don't think I lost much carbonation).

As you can see below, despite giving the beer only 29/50, the judges comments were pretty positive overall.  In fact I really don't disagree with much that they said (except the comment that there was a surprising amount of sweetness with the final gravity at 1.002).  It was a nice touch to have Stan Hieronymus, who just wrote a book (Brewing with Wheat) with a section on the style, judge my beer along with another National ranked judge.

Here are the sheets if anyone wants to read over the comments for themselves (or just take a look at the different format from the usual BJCP sheets). 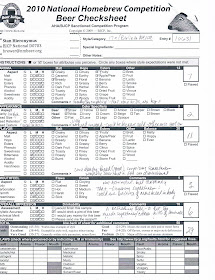 I was happy to see that Remi Bonnart won Brewer of the Year (Best of Show) with a Flanders Red. Sours really seem to get a lot of respect when it comes to beer judging.

Hopefully the new batch of Berliner I have fermenting downstairs will be able to make it as far as this one did.
The Mad Fermentationist (Mike) at 7:59 AM