Back in February I managed to convince  dozen or so other members of DC Homebrewers to come over to my house to brew an anniversary beer despite the massive amount of snow we'd been hit with.  We came up with the recipe on the fly based on the ingredients that everyone brought.  We tried to focus on local ingredients like homegrown hops, smoked malt from a Virginian distillery, yeast from a DC brewpub, and wildflower honey from Maryland.  I brought a few tester bottles to the June meeting last night, the people who tried it seemed to enjoy it, but we'll see how it ages over the next five years (after this preview we'll be drinking only a few bottles at the February meeting every year until it runs out). 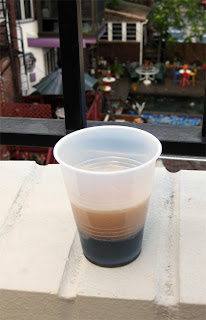 Appearance – Dark brown with a thick tan head. Carbonation looks a bit stronger than I would have expected for a beer that only got 2.25 oz of cane sugar for priming.

Smell – Nice blend of dark malt and light smoke. Not much honey or hop presence in the nose.

Taste – Good balance, with the dark malt mingling nicely with the sweet smoke. The roast character leans towards lighter roast coffee, and heavily toasted bread, no burnt/charcoal etc... The hop bitterness is there to balance the beer, but it doesn't take much since it is pretty dry (thanks to less than 2% crystal malt and the highly fermentable honey). Slight alcohol warmth in the finish, but I think its in character for a beer just above 8%.

Mouthfeel – Carbonation is a bit higher than I anticipated, which makes the beer seem lighter (not so bad on a hot June night). Body is light for a big stout, but it isn't thin.

Drinkability & Notes – Tasty, glad too many brewers in the brewhouse didn't spoil the beer. Hopefully this is just the first in a series of anniversary beers for the club, glad so many people were able to contribute and attend.
The Mad Fermentationist (Mike) at 6:09 PM