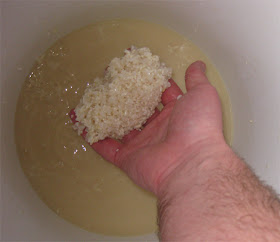 Seems like there is some solid interest in sake drinking (and I was impressed that three people had brewed sake three or more times), so hopefully most of you have been enjoying the play-by-play on my first batch.  The process has been pretty interesting for me so far, and it has really made me appreciate how relatively simple making other alcoholic beverages (beer/mead/cider) is in comparison.

To the people who have brewed sake, how did it turn out?  Any tips or pitfalls?

I'm planning on splitting my batch to get some different styles (clear/cloudy/carbonated etc...).  Since I have extra koji spores I may even brew a second batch in the fall/winter, depending on how well this batch turns out.  At this point though I doubt it will become a yearly thing like my annual batch of cider.
The Mad Fermentationist (Mike) at 10:48 PM