While waiting for the sake yeast starter (Moto) to finish I did some bellyaching about how slowly the process was going, after spending five nights building up the size of the batch with increasing additions of steamed rice and water I'm not complaining anymore.  This Moromi process is similar to the way some brewers do high gravity all-grain beers, starting with a small volume of moderate gravity wort and building with additions of concentrated wort.  The concept of building up the batch isn't too complex, but there are numerous individual steps (and it involves some annoying steps). 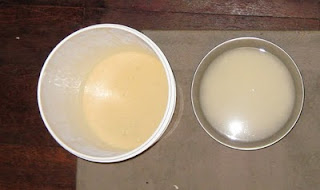 The three additions are composed of the same steps (add koji>wash rice>soak rice>steam rice>cool>mix rice and water into sake).  Each of the three has a traditional name (Hatsuzoe, Nakazoe, and Tomezoe), but I'll just refer to them as 1st, 2nd, and 3rd. Right before going to bed the night before an rice addition I added some of the koji I had made a few weeks earlier to the fermenting sake.  The koji provides enzymes to break down the starch from the rice addition the next day.

In the morning (before heading off to work) I washed and then started soaking the rice for the night's addition.  When I arrived back home I drained the rice in a metal strainer to dry the surface.  After 30-60 minutes of draining I put the rice into a cheesecloth lined steamer and steamed it for 45-50 minutes.  The second addition required me to use both tiers of the steamer basket (which I rotated top to bottom halfway through), while the third necessitated two separate rounds of steaming.  The method for preparing the rice is the same as it was for the moto and the koji, so check out those posts if you want more details. 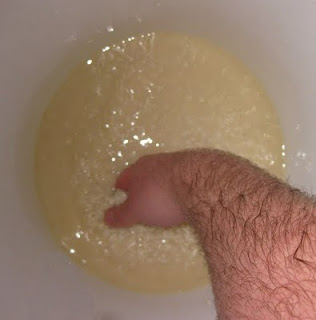 After steaming the rice I let it cool for five minutes in the steamer (so it was a bit easier to handle).  I dumped the rice into a metal bowl (getting as many of the stuck grains off the cheesecloth as I could) and let it cool for 15 minutes, then mixed in the specified volume of chilled water.  The first addition also got 7 g of  salt substitute (mostly Potassium Chloride) which serves as a nutrient for the yeast.  Once the rice/water mixture was close to room temperature I poured it into the sake.  I then mixed the whole batch with my well washed hand for 30 minutes.  This mixing ensures that all the rice grains are separated (which happens quickly if you did a good job washing your rice).  I suspect the extended agitation also helps to liberate starch from the rice (much the same reason risotto is stirred as it cooks).

Here is an overview of the process:

(The rice volumes/weights are pre-cooking, the koji volumes are as prepared) 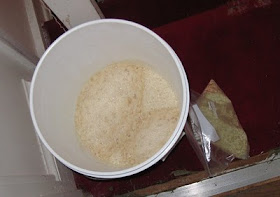 After the first two rice additions the sake is held around 70 degrees to allow the yeast to continue its rapid growth, but after the third addition the sake is chilled down to around 50 degrees for the remainder of fermentation (Odori).  A cool fermentation leads to a smoother alcohol character (just like when brewing beer).

Fermentation was surprisingly active with some sake foaming up into the airlock despite the fact that I chilled the fermenter down after the third addition instead of waiting 12 hours as the Taylor-MadeAK guide suggested. The guide called for the batch to be around 4 gallons at this stage, but mine was only 3.25 (not sure what caused this discrepancy).

Once all of the rice/koji/water is incorporated, the main fermentation takes 3 weeks.  This is a bit longer than you'd expect even for a high gravity beer, but remember that the enzymes are still working and the lower temperature will slow them down.  For the first 6 days the sake needs to be stirred/swirled once or twice a day to ensure the yeast/enzymes are evenly distributed.

Over the next three weeks the enzymes and yeast completed their task.  With fermentation complete I had to separate the sake from the rice

5/18/10 7:30 AM washed 2.5 cups of rice and started soaking.  After returning home, drained the rice, then steamed it for 45 min.  Let cool for 20 min then mixed with 2.75 cups of filtered water mixed with 7 g of potassium chloride salt substitute that had been in the fridge.  Mixed into the moto by hand for ~25 min or so, not many clumps to break up.  Mixture tasted boozy/sweet/tart, seems to be headed the right direction.

5/20/10 Started soaking 6 cups of rice in filtered water in the morning.  Steamed for 50 min after work, used two steamer trays rotated half way through.  Let cool briefly then mixed with 8.75 cups of filtered water.  Added to sake and stirred by hand for 30 minutes.  Milky/starchy, does not taste as sweet/boozy/tart as before. Total volume ~1.75 gallons.

Added 3 cups of koji and stirred in a couple hours later, already a good fermentation going including a moderate krausen.  Left in the basement in the upper 60s.

5/21/10 Soaked 5 lbs of rice starting in the morning.  Steamed in 2 batches for 50 min each (rotating the tiers top to bottom halfway through).  Mixed with 1 gallon plus 1 cup of filtered water.  Mixed into the rest of the batch by hand for 30 min.  Total volume ~3.25 gallons.  Placed in the fridge at 50 degrees (instructions were to leave it @ 70 overnight, but I didn't want too much fermentation happening at those warmer temps).

By the next morning the airlock had a bit of starchy sake in it and fermentation was raging.
The Mad Fermentationist (Mike) at 9:38 PM