After a night spent with Nate bottling our Munich Porter and the DCHB Smoked Honey Stout, I needed a beer to cap off the night. I decided to go with my Butternut Squash Sour Brown (brewed February 2009, bottled a year later).  I did a tasting of the dry hopped version of this beer nearly two months ago I thought it was time to give the "plain" a once over. 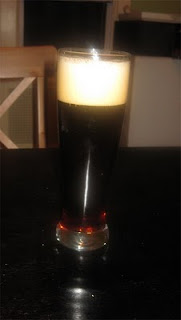 Appearance – A rich leather brown, clear when held up to the light. The light tan head pours two-fingers thick, falls quickly to a quarter inch, but holds steady there.

Smell – A certain honey-ish aroma plays with sharp acidic (like a sweet-tart) on a sweet earthy backdrop. I suspect that some of the earthiness is from the roasted squash, but it is too subtle for me to be positive. A swirl brings out a hint of spice, nutmeg to be precise, the cinnamon is a background note at most. Complex, but not well integrated (I get each part separately not mingled).

Taste – Tongue curling, saliva gland watering, lip smacking, sinus clearing sour. One of the strongest lactic acid sournesses I've created, but there is enough sweetness to keep it from being overwhelming. With each sip the sourness fades a bit and the complexity comes out. The light spice is the first thing I notice, warm and autumnal. Next comes the dark fruit character, cherry, fig, and raspberry (the Cabernet Sauvignon I added?). Interestingly there isn't much funk to it, very clean.

Mouthfeel – Decent body, not as thin as many sours get. This may be a result of what seems like minimal Brett activity given the lack of funk/barnyard in the aroma/flavor.

Drinkability & Notes – One of the better sours I have done to date, complex yet drinkable. I think I was lucky that it didn't get too funky, much more and the minimal spice/squash character would be undetectable.  If you really wanted a "fall" sour I would up the spice and squash, but I like it minimalistic.
The Mad Fermentationist (Mike) at 11:14 PM