Here is the first of the four tastings of the Breakfast Stout Riffs I brewed back in November.  I though the plain portion would be a good place to start before moving onto the spinoffs: Canadian (Chocolate/Coffee/Maple), Dessert (Chocolate/Vanilla), and Mexican (Chocolate/Chili/Vanilla/Cinnamon).   Oddly all of the beers ended up with too much carbonation (this may be a result of the 1/2 tsp of table sugar I added to each bottle instead of my usual technique of mixing a priming solution into the whole batch before bottling.) 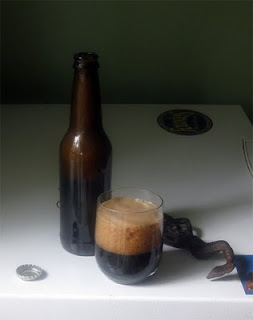 Appearance – Big foamy pour, a results of more carbonation than expected. Once the foam settles down the beer is an impenetrable black, even when held to the light. Very dense, mocha head, good retention and lacing.

Smell – Sharp bitter chocolate, oddly resiny. Not a complex nose, but not unpleasant either.

Taste – Solid bitterness, very clean. The carbonation and roast enhance the hop bitterness, which tastes more assertive than 46 IBUs should in a 1.091 beer. The chocolate from the nose comes through nicely, along with some espresso. It is missing the dark fruit and/or caramel I was expecting the Crystal 120 would bring. Just a bit boring for an Imperial Stout, more in the English tradition.

Mouthfeel – The carbonation is strong enough that the beer foams a bit in my mouth when I take a sip, not right for a rich ponderous beer. Once it warms and I swirl out some off the carbonation, the body seems smoother and fuller. The whole batch ended up over-carbonated, not sure why.

Drinkability & Notes – Not a great beer on its own, but this recipe is intended to be a stage for a variety of other flavors. It may improve with some age, but I don't see this “plain” portion ever being a great beer.
The Mad Fermentationist (Mike) at 3:41 PM