With how well the Barrel Team's first beer came out, this batch had a lot to live up to.  A year ago there didn't look like much hope of that with an infection starting to take hold of our Wee Heavy after a few months of sitting in a first use bourbon barrel.  Luckily we don't mind sour, so instead of trying to fight the microbial horde with campden tablets and sorbate we embraced it by tossing in some bottle dregs from a sour beer tasting.  Hopefully the bugs/time/wood will treat the stout that took its place just as well. 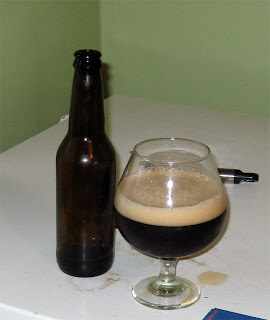 Appearance – The beer is a beautiful rich leather brown. Maybe a few shades darker than a Wee Heavy ought to be, but spot on for an Oud Bruin (especially an imperial one). The white head pours thick and creamy, but rapidly recedes to a thin covering.

Smell – After a hard pour into the snifter the first aroma is straight up bourbon, luckily that dissipates after a few seconds. The rich maltiness survived the barrel, lending raisins, cocoa, dates, toasted bread etc... The barrel lends just a slight hint of coconut and vanilla, beautiful. There is some tartness as well which combines with the ethanol to give a fortified wine character.  Not much funk, overall pretty clean fermentation character.

Taste – Nice tartness, but there is still some sweetness to balance. The complex malt and dark fruit flavor is there from the aroma. The alcohol doesn't come through as much as it does in the aroma, but it is still present without being “hot” (not too surprising since this is 12% ABV without including the 1% - 3% alcohol pickup from the bourbon barrel). One of the most port like beers I've sampled, rich, fruity, and boozy.

Mouthfeel – Decently thick and chewy for a sour beer, perfect medium-light carbonation. The tannins from the wood are a bit aggressive, but they should mellow with some more time in the barrel.

Drinkability & Notes – For me this one is headed up there towards the best commercial examples of big-dark-sour-beer (Consecration, Oerbier Reserva, Bon Chien etc...) but isn't quite there yet. The alcohol is a bit more aggressive than the others, and the flavors aren't quite as deep. At 18 months this is still a young beer though, and it has plenty of time to develop in the bottle. Another win for Team Barrel.
The Mad Fermentationist (Mike) at 8:21 PM