Last night was Audrey's birthday party. With mostly girls coming over I though it would be a good time to serve some fruit beer (not to stereotype). I had diverted a few liters of my Citra Pale Ale onto 1.25 lbs of papaya a few weeks back, so I strained the resulting beer into a 2L soda bottle the night before and use my carbonator cap to give it some CO2. The papaya chunks hadn't broken down much despite being frozen/thawed and then sitting in the beer for the last three weeks (which made separating beer from fruit easy). 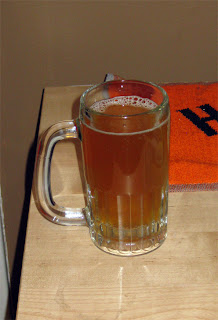 Appearance – Hazy yellow-gold with a thin white head. I probably didn't get quite as much carbonation there with my carbonator cap which explains the poor head formation.  A bit murky from tiny bits of the the fruit.

Taste – Balanced, moderate bitterness pretty dry. Nice crisp/clean flavor, with good fruitiness. The papaya doesn't come through as much in the flavor as it did in the aroma, but it is still “tropical.”

Mouthfeel – Medium light body, with medium-low carbonation. Alright, but I like the higher carbonation I have on the plain-draft version.

Drinkability & Notes – Nice pale ale with just a hint of papaya, went over well with everyone. I was expecting more flavor from the papaya, but it was fine at this lower level. I realize that papaya isn't as powerful a flavor as some other fruits, but I think this one may have been a bit underripe.
The Mad Fermentationist (Mike) at 9:14 AM