The second in my series of four Imperial Stout tastings.  This one was inspired by Founder's Canadian Breakfast Stout, infused with cocoa powder and whole El Salvadorian coffee beans, and aged on bourbon then maple syrup soaked American oak cubes. 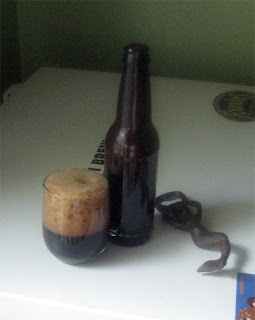 Appearance – Pitch black. The tan head starts out tall and thick, but over the first few minutes the bubbles combine and burst. A ring of foam remains as long as the beer does (poorer head retention than the plain is probably a result of the oils from the cocoa and coffee).

Smell – The first aroma is pure fresh brewed coffee (rich, earthy, just a bit of spice). After that the chocolate comes out, but stays in a supporting role. A bit of toasty malt character blends in, but this is a mocha aroma primarily. The beer displays just a hint of ethanol as it warms up.

Taste – Good balance between sweet and bitter. The finish is long, filled with slightly bitter coffee, and rich desserty cocoa. Not much maple character, but I think it helps to add some to the earthy coffee flavor. Could use more “beer” character, but it doesn't come off as over-the-top novelty.

Mouthfeel – The mouthfeel is annoyingly thin and spritzy, just like the plain version. The head isn't as dense as it could be, which would have added nicely to the creaminess of the mouthfeel.

Drinkability & Notes – A solid attempt at a big coffee/chocolate beer, but I wish there was more of the bourbon/maple flavor from the syrup and cubes was imparted to the beer. Next time I'll age the beer on the cubes longer and add more than 2 oz of syrup per gallon, starting at a lower gravity to compensate.
The Mad Fermentationist (Mike) at 7:18 PM