Chile-chocolate Imperial Stouts seem to be one of the newest combinations to gather a following.  Chocolate and spice are a classic pair in Mexican cooking, and as an addition to a big stout they make for a more complex, interesting result than any of the obnoxiously spicy pale/amber "chili" beers I have tried.  There aren't a huge number of them available yet, but Great Divide Chocolate Oak Aged Yeti, Cigar City Hunahpu's, and Sierra Nevada Hellraiser are the three to be on the lookout for (also check out the recipe Terry from Bullfrog Brewing gave us for his Chocolate-Chile-Christmas-Thingy). 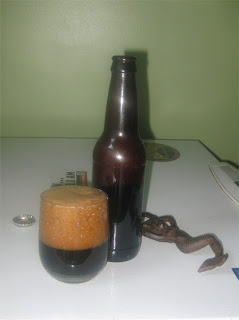 Appearance – Pitch black, just like the other variations on this beer. Unlike the others though the retention of the tan head is terrible, there must have been some oil on the surface of the chiles.

Smell – The chiles come through nicely with some fruitiness (berry/raisin). The chocolate plays a supporting role, reinforced by a hint of vanilla. Good aroma that showcases the chile, but isn't quite as powerful as I would have liked.

Taste – The beer is slightly spicy on the tongue, but the heat doesn't last more than a second or two after a sip. The complex fruitiness carries through from the aroma, going with lower heat chiles was the right call. There is some chocolate/vanilla in the middle, as well as some cinnamon spice in the finish. The carbonation is strong enough to add a bit of carbonic acidity to the flavor. I do wish the beer was a touch sweeter to help accentuate the richness of the flavor.

Mouthfeel – The strong carbonation get in the way of the savory qualities of the beer, making it seem thin and a bit harsh.

Drinkability & Notes – If it weren't for the excessive carbonation this one would be pretty close to my ideal chile beer. It has a good balance, a complex spice character, and not too many Scoville units. I'll certainly be brewing a full batch of this at some point, with a tweak or two. Besides making sure the carbonation is in check, I'll also try to de-oil the chiles (or find some oil free) to improve the head retention, and probably up the cocoa powder a bit.
The Mad Fermentationist (Mike) at 10:01 PM