Probably the most debated question among homebrewers when the topic of brewing pale Belgian beer (Belgian Blonde, Strong Golden, Tripel etc...) comes up is which sugar to use.  These beers don't need a characterful sugar (like a Dubbel of Belgian Strong Dark), just something easily fermentable to boost the alcohol while leaving a light body.  For years the answer was clear candi rocks, since it was assumed that these were the most authentic.  Then a few years back Brew Like a Monk came out, with the suggestion that those rocks were just overpriced sucrose, changing the answer to table sugar (cheap sucrose).  Then Dark Candi started selling clear candi syrup, the same stuff Orval (along with many others Belgian breweries) uses... and what about corn sugar?  Is sugar really necessary anyway?

These were the questions I set out to answer for myself a few months ago on a wintery December day. I split one 5 gallon batch of 100% pils wort between the main sugary contenders, including one gallon with no sugar at all. Two weeks later each batch was primed with the same experimental sugar (the no sugar got light DME) and bottled.  Last night I finally had the chance to sit down to do a full, blind tasting, to see what results I could tease out of my experiment.

As expected the five batches were very similar, so I'll forgo a full review of each to focus on the flavor and aromatic differences. All of the batches had an identical golden-yellow/orange body with a nice white head with moderate-poor retention (I poured from left to right in the picture, so the first two are a bit less heady).  They were all crystal clear as well, so the sugar had no influence on the appearance.  The aromas shared a similar bready/pils malt character and the flavors had just a hint of hop bitterness.  All finished plenty dry within .001 of 1.006 (certainly within the margin of error for my hydrometer reading skills), and none of them came across as more boozy or alcoholic than the rest. 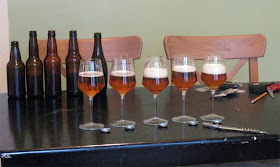 Table Sugar: The most apple character, a bit more sulfur/yeasty, and the spice is more toward pepper.  The sulfur has mellowed from when this batch was young when it was clearly different from the rest.

No Sugar: Brighter, the spice comes across as clove, the flavor also had a bit of less-fermented "worty" character. The hops also came across a bit more than the rest, maybe a testament to the lower alcohol or milder fermentation.

Clear Candi Rocks: This one is the only one that was a bit over-carbonated.  It comes across with a softer/rounder character though, and it also has a nice pepper zip.

Clear Candi Syrup: The cleanest/mildest of the bunch, no real defining characteristic (although it certainly still had a distinct Belgian yeast character).

Corn Sugar: Another clean/mild one like the syrup, except for a bit of extra clove (second only to the plain).

I would like to emphasize that the flavors/aromas of these batches were all very close (say 95%) and I had to let them come up close to room temperature to get some of these differences. I think most of these differences could not be detected unless you were trying them side-by-side.

The most surprising result was that I picked out the table sugar (for whatever reason) as the most appley, a shock as I have long been a doubter of the so-called "cider" character some people claim cane sugar gives. It also was the only one that showed some signs of sulfur when it was first in the bottle a few months back.

I found it interesting that both the beers with sucrose (table and candi rocks) came across with a spice character of pepper while the no-sugar and corn sugar leaned more towards the clove.  Not sure what this indicates, but it may be that 3787 (Westmalle strain) has different byproducts when it ferments sucrose.

I also found it interesting that I didn't notice much body/alcohol difference between the no sugar batch and the other four with sugar, although I did pick it out as being wortier.  This is a testament to the fact that all of these sugars are easily fermented by Saccharomyces and left nearly identical final gravities, with just alcohol as a byproduct.

In the end my take away from this was that the difference between these different clear/white sugars when brewing a beer this clean is probably similar to the difference between using two pilsner malts from different maltsters.  That is to say something that you might play with when really trying to dial in a beer, but not something you need to to worry about the first time brewing a recipe.  While these beers did have slight differences, they were so slight that I really didn't have a preference for any above the rest.

I'll be running the five samples by more people in the future to get a broader sampling of what people can taste as the difference between these sugars.
The Mad Fermentationist (Mike) at 7:49 PM