After doing a tasting of my second attempt at cloning Mo' Betta Bretta, I thought it was time to do a tasting of my first attempt (the recipe was the first post on this blog). The first and second batches were very similar, the only major changes were the strain of Brett (Brett C for batch #1, and Brett A for batch #2), and the way the acid/sauer malt was added (to the main mash at the start of the sparge for batch #1, separately for batch #2).

After how oxidized the second batch tasting was I didn't have high hopes for this one, but it pulled through. One of the two recipe changes (or another uncontrolled process variable) was the flap of the butterfly's wings that sent these two batches in completely different directions over their two years in the bottle. There is always a bit of luck involved in brewing, particularly in 100% Brett beers, and this is just one of those times when things worked out.

Sadly I don't have any of the first batch's dried cherry Pinot noir portion left to sample (most of it was sent out for the BBB 100% Brett swap). 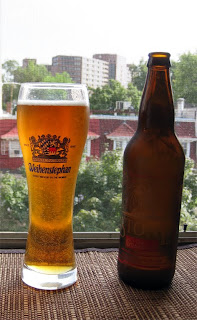 Appearance - Brilliantly clear golden with a thin white head. The carbonation keeps the head inflated, but it is not as voluminous as it was in the beer's youth. It took some time to clear, but this is a beautiful beer now.

Aroma - Terrific stone fruit aroma (peaches and apricot in particular). This would make a great base for a fruit beer with one of those. Luckily no sign of the oxidation that plagued the considerably younger bottle of Batch #2 I had a few weeks back. There is some musty/barnyard funk that this batch has always had, but it is just a subtle complexity compared to what it was when the beer only had a couple months in the bottle.

Taste - The flavor is very nice, lightly tart and crisp. The apricot carries over from the nose and is joined by some cherry. The flavor is just a bit sweeter than I recall, by now basically all of the bitterness has faded. A well rounded flavor that gets funkier as it warms (but never unpleasantly so). No malt character and just a slight breadiness from the malt.

Mouthfeel - The carbonation gives it some lightness, but the beer still has a medium body (probably from the oats). I remember it feeling a bit lighter in the past, but it is fine as is.

Drinkability/Notes - It was no chore to down the entire bomber on a warm evening. The combination of complexity and drinkability makes this an excellent beer. Maybe a bit past its prime, but still in very good shape considering that it is a pale, moderate gravity beer that was brewed 30 months ago. I had forgotten how good these 100% Brett beers can be, I'll have to do another run of them sometime soon.
The Mad Fermentationist (Mike) at 7:29 AM