On a schedule of alternating weeks, last Sunday was Mike's turn to decide what we would make for lunch. Chicken-Under-a-Brick is essentially butterflied chicken, pan roasted under something heavy so as to encourage a deep, crisp browning on the skin. A much quicker mode of cooking than, say, roasting a whole chicken, the butterfly cut levels out the flesh to cook evenly and quickly. Accompanied with a simple salad and some roasted roots, this Sunday's lunch was comforting and filling without being too heavy for the summer heat. 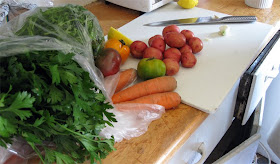 If you have some extra time you can brine the chicken for an hour (which we did). The chicken was submerged in a solution of 1/4 cup of kosher salt and 2 tablespoons of turbinado sugar dissolved into 2 quarts of water. This process both seasons the meat and allows it to retain more moisture over the course of cooking leading to juicer meat. If you want to flavor the meat you could certainly add some crushed garlic, herbs, or spices to the brine as well, but with such a high quality free range chicken it didn't seem worth it. 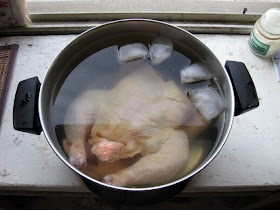 For Mike to prepare the chicken, Audrey had the pleasure of witnessing the sickening crunch of bones and spine removal a la Mortal Kombat (nerd alert: it was a Deadly Fatality!). Butterflying a chicken can be intimidating, but is actually a pretty simple procedure once you have done it a couple times. First cut out the backbone (this can be done either with a knife or kitchen sheers), then flip the bird over and apply pressure to the breast to flatten it (enter sickening crunch here). Finally flip it back over and make a shallow incision in the membrane that covers the keel bone that separates the breasts, and leaver it out with your finger. Such butterflying as this makes for much faster cooking as well as easy serving at the table. 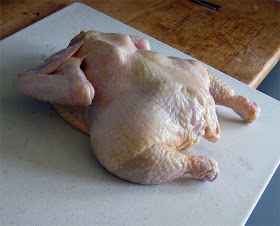 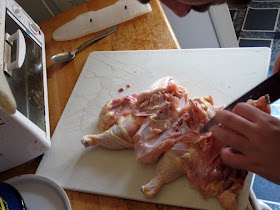 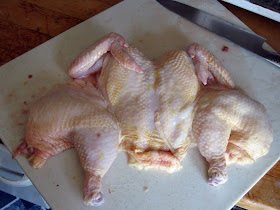 Butterfly chicken can also be grilled outside, but in the heat of mid-August (and living in an apartment), we opted to stay indoors and make good use of the stove and oven. Dry the skin, then lay the entire chicken down in a lightly greased pan (we used cast-iron, but anything oven-proof would work) and set either two foil-wrapped bricks, or (as we did) a heavy cast-iron dutch oven, lightly greased, directly onto the exposed flesh. The pressure helps to keep the skin in contact with the pan, increasing browning and deliciousness. 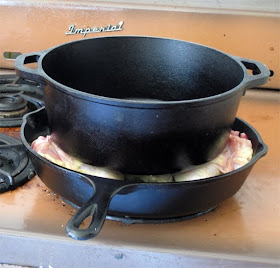 After about 5 minutes, we began to smell the familiar waft of frying chicken skin, but we kept it there for a good 15 minutes total before performing an amazing feat of chicken-acrobatics. We moved the chicken onto a plate, drained out most of the grease from the pan, laid down the potatoes and carrots (any root vegetable could work here as well), and replaced the chicken, skin side up this time, on top of those (no need to replace the dutch oven/bricks this time as it goes into the oven which was preheated to 450 degrees). 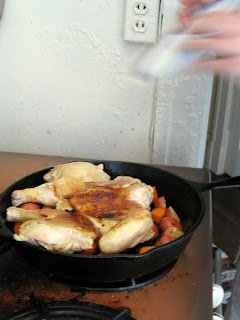 Brush with a simple mixture of lemon/olive oil/garlic/red pepper flakes/black pepper. The brined bird will give up some salty liquid, so you may want to hold back on seasoning the vegetables until after they are cooked (in our case they needed a bit of salt). 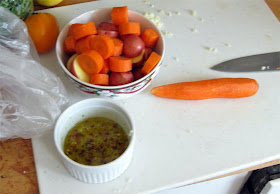 Once the chicken hits ~150, go ahead and remove it from the oven and let it rest on a cutting board or plate. In our case, the chicken seemed to cook a little faster than the roots, so we poured off most of the liquid from the pan, and returned them to the oven until cooked through. To serve, we placed the carrots and potatoes in a bowl and topped the chicken with a good bit of chopped parsley.

While the chicken cooked we made a simple arugula salad, with a basic dressing of lemon juice, olive oil, salt and pepper (pretty similar to what was poured on the chicken). Being late summer, we of course could not leave the tomatoes off the menu, so we just chopped a couple of colorful ones to top of the dressed arugula. 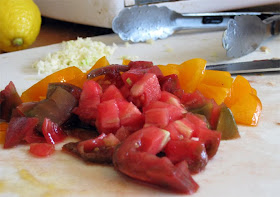 For the beer we went with Mike's Hoppy Brown. The hop character is a bit over the hill now at seven months old, but the lightly roasted malt did a good job matching the roasted flavors in the root vegetables and chicken. 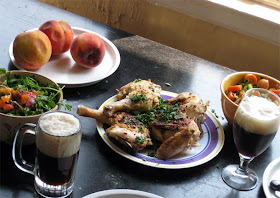 And finally, what is such a hearty meal absent dessert? Well, still pretty good, we assume, but with a good amount of blueberry peach pie leftover from a pretty fantastic potluck the previous night, we helped ourselves to a couple of fat slices. 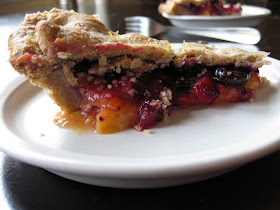