Despite not doing much actual summertime brewing, this time of year my thoughts always turn to adding fruit to aging sour beers. I love the way the acidity of the beer brings out the fruit character in a way that no other base beer can. Here is a brief update on a few of my fruited sours.

Today I added 5 lbs of (sliced and lightly mashed) white peaches from the farmer's market to about 2 gallons of my Honey-Wheat sour. Originally I was planning on adding some flowers to that batch before bottling, but after waiting 6 months I decided fresh peaches sounded like a much better idea (it is hard to say "no" to beautiful fresh fruit). I have always heard that peaches don't work great in beer, but having tried the delicious Festina Lente from Dogfish Head and the tasty Eric's Ale from New Belgium (and hearing my friend Dyan rave about Lost Abbey's Yellow Bus) I just had to give it a try for myself. 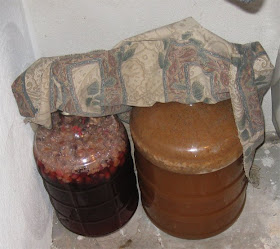 Half of my Lambic 2.0 from last summer has been sitting on a combo of dark cherries and raspberries for the last month or so. I racked the 2.5 gallons of beer onto 18 oz of raspberries and 2 lbs of cherries which had been frozen for about 24 hours. I am hoping that the fruit's acidity and the renewed fermentation from the sugar add a bit more tang since the base beer doesn't have quite enough sourness for my taste. I will be aiming to bottle that one in a couple months depending on how it is tasting and if the gravity drops back down close to 1.000. 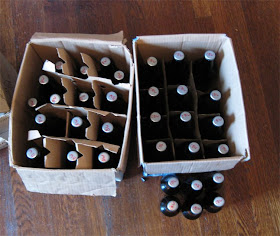 Over the weekend I bottled my Cabernet spiked Berliner Weiss. Hopefully it carbonates soon because that is exactly what I should be drinking now that it finally feels like summer here in DC. The beer was a nice deep cranberry-red in the fermenter, but looks decidedly more pale in the sample tube. 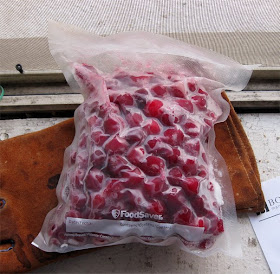 I also have 5 lbs of sour cherries vaccu-packed in my freezer. Some of them will go into a portion of the Wine Barrel Flanders Red that should be ready to go in a couple months, and I am thinking about doing another version of my Cuvee Tomme clone in the fall.

I am about to buy a house, so my brewing/posting may not be on quite the pace after the closing later this month. That said, once I get settled in I finally have a yard (plus a basement and a garage), so I'll be brewing outside, and have more room for aging beers, cheese, charcuterie, and other fun projects.
The Mad Fermentationist (Mike) at 7:31 PM