I've been holding off on reviewing this one for awhile, hoping it would improve, but the time has finally come to bite the bullet. After two years in the fermenter, 6 months on fruit, and 6 months in the bottle, I can officially call this beer a failure. 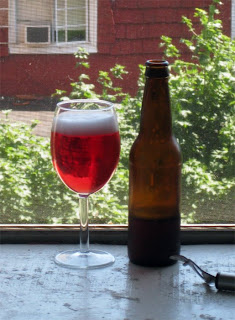 Appearance – Talk about a beautiful beer, brilliantly clear (right out of the fridge) purple-red with a one finger stark white head. Clearly a good amount of carbonation streaming through the beer and giving the head a lift.

Smell – Sadly the aroma does not have the same beauty. It starts off with a pleasant enough spiced blueberry note, but after that comes a harsh solventy assault. Not much else to speak of.

Taste – Nice lactic tang up front, but the finish has that same off putting chemical flavor as well as some vegetal notes. There is certainly some acetic acid as well that scrapes at my throat. It has none of the characteristic funky lambic complexity, it just tastes like a crappy infected blueberry wheat beer.

Mouthfeel – Light and crisp, except for the acid. The traditional hot sparge did not extract any tannins that are still hanging around.

Drinkability & Notes – What can I say? The base beer wasn't great and the fruit certainly didn't help matters much. Not sure what caused the problem, but when this beer is thinned with a bit of water it improves quite a bit, so part of the problem was probably the too big OG.

I am hoping that whatever bugs were in the lambic that I blended into the pluot Flanders pale don't do any harm to it (I'll see when I bottle it in two weeks). Hopefully the changes I made for my second batch of lambic (namely adding more microbes to get fermentation going sooner than four days) will give me better results. I am planning on doing a third batch in a couple weeks, this time with a traditional turbid mash (that will be a fun day...).
The Mad Fermentationist (Mike) at 10:43 PM