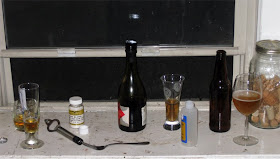 So you wanted to brew a sour beer, you pitched the requisite microbes, waited a year or more for them to do their job, and and when you finally give it a taste it is just mildly tart. Pro-brewers take this opportunity to blend, but what if you don't have any acid beer to blend. Can you just take some acid and use it to sour up your ale? Wild Brews claims that you get a "harsh and medicinal" flavor if you just add food grade lactic acid (the main acid in sour beers), but it sounds to me like the author is talking about adding acid to a clean base beer (not to a beer that already has some acid and funk).

To answer some of these questions for myself I decided I would give acidifying a bottle of the Temptation clone I brewed 18 months ago that never got sour enough.

88% Lactic Acid - Lactic acid makes up between .18%-.52% in Gueuze (according to Wild Brews). This would work out to about 2.4 oz of this lactic acid in 5 gallons to get .3% lactic acid. A few drops in a small sample gave a classic sour twang, but there was also a hint of butteriness. I wonder if they use pediococcus in the production and some diacetyl makes it in. If it is the diacetyl , then adding this acid early in the secondary fermentation to give the Brett time to deal with it would be a good idea. When I added enough to make the beer really sour there was a lingering aftertaste, but it was hard to put my finger on exactly what it was.

Sherry Vinegar (7% Acetic Acid) - Acetic acid makes up between .06%-.12% in Gueuze (again according to Wild Brews). This would work out to about 5.5 oz of this vinegar in 5 gallons to get .06% acetic acid. I don't like my sour beers to have too much acetic acid, but I found that the lactic acid tasted better when there was a touch of acetic acid to give it a bit more bite. Of course you could use distilled white vinegar if you don't want any other flavor contribution.

With the two "standard" sour beer acids out of the way I wanted to try some of the other acids available at the homebrew store.

Acid Blend (Malic, Tartaric, and Citric Acid) - Acid blend is granular and usually used to adjust the acidity of wine and mead. It took a rather large amount of this to get noticeable acidity and it never tasted quite right, sort of like sweet-tarts. In small amounts blended with the lactic/acetic blend it complements the other acids (sort of like a fruit lambic).

10% Phosphoric Acid - This is the acid in sodas and in the bottle almost smells like a Cocoa-Cola. The sourness is certainly potent, but the character just doesn't taste quite right (the sourness didn't linger like a sour beer).

I was impressed by the results enough that I'll be giving this a more formal (measured) try the next time I have a sour beer to bottle that isn't sour enough.
The Mad Fermentationist (Mike) at 9:15 PM