I based the recipe off of Janet's Brown (a Mike McDole recipe) in Brewing Classic Styles, but I tweaked it a bit. I backed down on the crystal and carapils because I felt that at 10% each it would be too sweet/thick for my taste in a hoppy daily drinker. I also fine tuned the hops and malts to match what I had on hand. I'm still working through the last of my 2007 hops, I bought mostly American hops when the hop shortage first started, but ended up brewing mostly European inspired beers for the last year.

This recipe has 7.33 oz of hops in just 3.5 gallons of beer. It had hops in the mash, three boil additions, and dry hops. All of the hops were Cascade pellets from Hops Direct except the Centennials for dry hops. The general idea of the recipe is that the crystal and high (154) mash temp balance out the huge hop kick better than a dry IPA. As a result a beer with a 1:1 bitterness to gravity ratio drinks like a less hoppy beer.

I am not a big fan of the Centennials from Freshops, they tend to taste a bit more herbal than I like my American hops. I've loved all the other varietals of hops I've gotten from them (and I love Bell's Two Hearted, an all-Centennial beer), but have now had issues with two different orders/vintages of Freshops Centennials. In this case though they blend pretty well with the dark malt, but it still isn't exactly what I was aiming for. 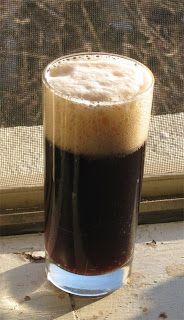 Appearance – Dark brown, bordering on black. Nice thick rocky tan head. Good head retention, the carapils and the crystal certainly responsible for this. Any darker and I would say it was a porter, but I think it still qualifies as an American Brown.

Smell – Fruity (apricot?) hops, with considerable dank/herbal notes. The hop character is more reminiscent of Columbus than Centennial/Cascade to me, not as bright as I was hoping/hopping for. Slightly toasty, chocolaty, bready malt contribution, but the hops conceal it for the most part.

Taste – Bitterness shines over the malt sweetness, but not by much. The high mash temp and crystal malt certainly did their job, balancing out the big hop bill. There is a hint of chocolate with a touch of charcoal.

Mouthfeel – Medium bodied, with medium carbonation. Glad it attenuated as well as it did, not as thick as I was anticipating.

Drinkability & Notes – Complex, but still balanced enough to drink easily. The malt balances out the hops, but it also makes this a less of a hop bomb than an equally hopped IPA. I made a mistake going with the Centennials, I should have used the Amarillo or Simcoe I have in the freezer.

Starter made 36 hours before it was pitched (never got a krausen, but it produced a head when swirled), crash chilled for 8 hours before pitching.

2007 cascade pellets from hops directed adjusted down from 4.8% AA.

Boiled down to 3.5 gallons, chilled to 66, strained to remove as much hop matter as possible, let sit for 20 minutes, then transferred to the better bottle (lost .5 G to trub), pitched ~1 qrt of starter (which smelled a bit odd) left at room temp around 74, cooled quickly to mid/high 60s with an open window.