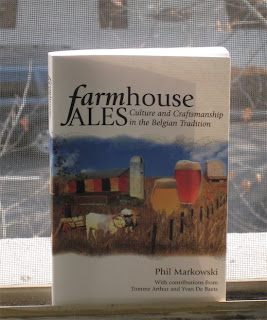 Farmhouse Ale: Culture and Craftsmanship in the Belgian Tradition by Phil Markowski covers the rustic styles of Bière de Garde and Saison (as well as other related styles). It is from the same excellent series of books on Belgian Brewing as Wild Brews and Brew Like a Monk (although each was written by a different author).


Markowski was the right man for the book as the Saisons and Bière de Garde that he produces at Southampton Publik House are some of the best American examples available (such as their Bière de Mars, French Country Christmas Ale, and Sasion). Aside from making great "to style" beers he also embodies the Belgian spirit with beers like Cuvee des Fleurs (a saison flavored with various edible flowers), and Sasion Deluxe (a super saison).

Content: The book starts out with a brief history of farmhouse brewing in what is now the boarder region between Belgium and France. The author claims that we are in a golden age of rustic brewing following a long period when most small breweries in the area just scrapped by making bland lagers for the local populace.

The book then moves on to a section that suggests that no set of style guidelines can accurately capture two such rustic and diverse styles. The commercial version can vary so much that it is nearly impossible to quantify all of the variations these two styles can have in a short description.


The rest of the book is roughly divided in half with a section on Bière de Gardes, followed by a section on Saisons.

Bière de Garde: This section gives the best look that I have found at this often overlooked style. It starts out with a review of the history of the style. This chapter is great because it covers part of brewing history that even most beer nerds aren't too familiar with. The style started out as something closer to a low alcohol historic English Old Ale (a moderate gravity beer allow to oxidize and sour slightly), but the alcohol has been increased over the last 30 years to make them into more of a specialty beer.


Next comes a section on the general characteristics of the style and sub-styles (Bière de Mars and Bière de Noel) and the best commercial examples to seek out. Like Brew Like a Monk many of the commercial beers discussed get an ingredient and method overview which would be a great help if you were trying to go in a certain direction or clone a beer. Each brewery gets a short profile as well, with some interesting tidbits about the history, brewer, and physical brewery.

The meat is in the last chapter of the section, which talks about production methods. Each ingredient and aspect of production are covered, first what the current commercial practices are, followed by the best suggestions for doing it for yourself.

It is very interesting to see the differences between the examples from larger and smaller breweries, particularly in yeast choice and grist composition. Smaller breweries tend to use ale yeast and relatively complex grain bills, while large breweries use lager yeast and often just base malt and a dark malt for color. It is more difficult for large breweries to use multiple malts or yeast strains, so this is more of a choice about ease of brewing rather than flavor profile.

Each portion of recipe development is laid out with the options (and effects) presented. There are some great charts with suggested yeasts (ale/lager and White Labs and Wyeast). The way that the book is written makes it very easy to use when designing your own recipe, or just for tweaking a recipe you already like.

Saison: The history chapter is written by Belgian beer expert (and brewer at De la Senne) Yvan De Baets. Saisons originally started as a refreshing beer for field laborers. Apparently the style has radically transformed over the years from something funky and reminiscent of low alcohol De Ranke XX to the cleaner, higher alcohol beer it is today.

Next comes a chapter covering the general description of modern saison including related styles (Grisette and Super Saison) and a review of a few of the commercial examples. These beers are pretty well known today as this book really kicked off a revival of the style when it came out five years ago. It is particularly interesting to read about breweries, like Vapeur and Blaugies, that are still basically brewing with some of the same ingredients, techniques, and equipment as farmhouse breweries did in the 19th century. It is also surprising how many of their breweries are part time jobs for the brewers (Alpine Beer Company is the only brewery in America that comes to mind like that, but I am sure there must be more).

Next comes the chapter on Saison production. The malt and hop suggestions are pretty short, but then the general suggestion is to keep things simple. The advice certainly leaves room for customization, but as a yeast forward style the malt and hop characters are not as important as they are for a Bière de Garde.

The big revelation of this section is that Saison yeasts love to ferment hot (often 85+). They are unlike any other beer strain out there in this regard (which is why Les Perkins from Wyeast suggests it may have mutated from a red wine strain). With most other strains fermenting at these temperatures would result in a beer that tasted like a combination of gasoline and nail polish remover, but with saisons you get a wonderful complex peppery-fruity flavor.

This chapter also has some nice info on using other grains like spelt, wheat, and oats. Spices are another big topic. The suggested amounts are far lower than you often see in homebrew recipes. I mangled my first batch of saison three years ago by adding 1 oz of dried ginger (on the suggestion of a BYO Hennepin clone). By comparison Farmhouse Ales suggests just .5-1.2 grams of dried ginger for a 5 gallon batch.

Recipes: Farmhouse Ales covers a few variations on each style, for eight recipes total. The recipe structure is similar o the other two books in the series. Like Wild Brews many of the recipes have built in options and ranges suggested for altering the recipe. For example "Add up to 5% white sugar (by extract)" or "Caramel Malt - add up to 2% for color and residual sweetness." I really like recipes that give some freedom and options, particularly styles like this that are not centered around a single "classic" example. That said if you are looking for a book with 40 recipes that you can select between you will be a bit disappointed. I also really like that this book (unlike BLAM) clearly tells you that the percentage of sugar is by extract.

I have not tried any of the recipes directly, but the Saison and Bière de Garde portions of my Cable Car Clone was highly influenced by the information in this book. The Dark Saison was also heavily influenced by suggestions in this book and the notes on SPF 8.

This book is less about recipes and more about recipe design, think of it as a Designing Great Beers for rustic Belgian/French ales (this book covers a much wider range of Saison and Beire de Garde in terms of gravity, color, bitterness, and flavor than the BJCP recognizes).

Readability: Much like Brew Like a Monk the information goes beyond just telling you how to brew the styles from a technical standpoint. It tells you how to think and design recipes like a farmhouse brewer. I like the way the book is divided in half, if you want to read about one style or the other you don't have to skim through the entire book.

I really like all of the headers that identify each topic in a chapter, for example in the Brewing Saisons chapter here are the headers for just four pages (Malt, Unconventional Brewing Grains, Mashing, Hops, Spices, Yeast), it makes referencing the book quick and painless.

Overall: A well put together book that looks at traditional and innovative brewing at the same time. An indispensable read for anyone interested in either Bière de Garde or Saison. That said, if these are not styles you have much interest in you'd probably be better off taking a copy out from the library since there isn't too much information that is applicable to other types of beer.

This is my second copy of the book (my first was left in a hotel room in Florida last spring), so it is in pretty good shape. If you buy a copy make sure it has all 198 pages, the first replacement copy I bought from Amazon was missing the last 50 pages.
The Mad Fermentationist (Mike) at 9:15 AM