One of my favorite things about the homebrewing community is the camaraderie. Whether at a homebrew club, on an internet forum, or hanging out with friends, homebrewers love to get together and talk about their hobby. Talking about process and flavors is one thing, but when you get the chance to collaborate with another brewer (as so many pro-brewers seem to have recently discovered) that is when the fun really starts.

It was over on a thread at the Burgundian Babble Belt that SteveG (who runs the site) struck upon the idea of blending his sweet strong cider (which was concentrated by boiling pre-fermentation) with my champagne like ice cider. He figured that the dry finish in my cider would help cut through the syrupiness of his cider, and the residual sugars in his would fill my cider out.

Here are the details on Steve's batch:
My first go got up to about 1.115, though I don't have a gravity on batch 2. I reduced 5 gallons to 2.5, pitched some fermenting cider to inoculate then set out to reduce down another 5. Plus there was the 2 doses of "crystal" that went from 2.5 gallons to 20 oz. Anyway, I filled the carboy over the better part of a week, fermentation was going very well so there was no point where I could have taken a reliable gravity reading. I will say though the syrup I made appeared to reduce more than the previous batch, it was bubbly and caramel-like in texture. I would have to guess that if anything, batch two has 5 or 10 points on batch 1.

Steve shipped me two bombers of his cider to blend with mine. After a couple sample blends I carefully transferred (poured) his cider into a growler along with three 12 oz bottles of my ice cider and one of my regular cider. After a few weeks of sitting (just in case there was any more fermentation from the champagne yeast in mine working on the sugars in his) I bottled the blend with 1/2 tsp of table sugar per bottle for carbonation.

The resulting blend (although still uncarbonated) is better than the sum of its parts. The balance of sweetness and acidity is wonderful, and the alcohol (which I believe is around 10% ABV) is nowhere to be tasted. The sad thing about all of this is that it only netted us three bottles each. I'll certainly be playing with making my own caramel apple syrup next fall. I'll do a full tasting once it is carbonated. 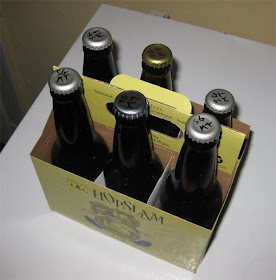