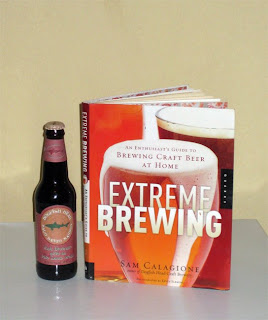 Extreme Brewing is the first homebrewing book written by Sam Calagione, the founder of the Dogfish Head Brewery. It tries to jump first time brewers right into making “extreme” beers bypassing the similar recipes that most other books recommend. Extreme beers includes using sugars, fruits, wood, high gravity, bacteria/Brett, and other ideas that the Dogfish Head has pioneered the use of.

Content: Like many of the homebrewing books I have reviewed this one is divided into two sections, with the first covering ingredients and process, and the second recipes.

The first chapter covers the basic ingredients that go into making beer. It just talks about malt, hops, water and yeast, giving them a good general overview for someone who has never brewed before. The gem of this chapter is a two page inset from Vinnie at Russian River on dry hopping that is well worth a read for any hophead.

The second chapter covers the equipment that the new homebrewer will need to buy. Sam does a good job covering most of the essentials and gives a little blurb about why each item is important. My major complaint here is that he is getting you ready to do full 5 gallon boils, but does not bother to mention wort chillers. Not that a wort chiller is an absolute must with full boils, but it would have been nice to see it discussed as an option.

The third chapter goes through a 26 step (A-Z) process for making your first batch of beer. I find it a bit odd that a 1.072 brown ale with nearly 3 lbs of sugar was selected for a first recipe. The actual process outlined seems fine, but the idea that you should encourage someone to brew such an “extreme” beer on their first try (before they master yeast starters, fermentation temperature control, and basic process) seems like a recipe for rocket fuel (fusels).

The fourth chapter covers many of the oddball ingredients that DFH is known for using. It looks at spices, herbs, fruit, wood, and has a brief paragraph about using wild yeast/bacteria. There are some pretty interesting ingredients covered including St. John's Wort, Arctic Cloud Berries, and Chicory. The suggestion for just about all the fruit is to add them at the end of the boil for a pasteurizing steep. I tend to like adding fruit in secondary, but adding it to the boil is certainly a safer method.

The final chapter before the recipes covers a brief overview of a handful of beer styles, and beer tasting tips. The styles looked at are a mix of BJCP and general beer slang (like Strong Ales). The tasting tips are pretty good, covering the ways your five senses can be used when evaluating a beer.

After the beer recipes there are is a final chapter with ideas for food pairings and recipes for using beer to make other sorts of food. There are some interesting ideas, pears poached in beer, a stout/chocolate reduction for ice cream. I haven't tried any of these yet, but it is a nice addition to the book.


Recipes: The Mo’ Betta Bretta clone is the only recipe I have brewed out of this book, and my version was converted to all-grain and tweaked. There is a good section about using Brett by Tomme Arthur at Lost Abbey included with the recipe as well. I have also sampled a few recipes that others have brewed from this book and haven’t been particularly impressed so far, but I have heard other people report good results.

There are four chapters of recipes covering ales, lagers, unique, and commercial beers. Many of the recipes are based on classic styles, but with an interesting twist (Molasses Marzen, Blood Orange Hefeweizen, or Peppercorn Rye Bock), while others are just higher gravity versions of existing styles (Imperial Pale Ale, Imperial Pilsner, and "14% ABV" Barleywine).

The commercial recipes cover a few Dogfish Head classics (60 Minute, Midas Touch, Raison D'etre, and India Brown Ale), as well as some contributions from Sam’s brewer buddies (Hopfather from Russian River, a Wit from Allagash, and an Imperial Stout from Avery). How accurately these recipes are scaled/converted from their commercial counterparts is up in the air. For example the Mo’ Betta Bretta Clone neglects to mention the lactobacillus that was used to sour a portion of the wort.

The recipes in Extreme Brewing are almost exclusively extract with steeped grain with one or two partial mash recipes. I would like to have seen an all-grain equivalent included for each recipe. The recipes are already formulated for people who can do 5 gallon boils. That being said most of the novel ideas and recipes could pretty easily be translated to all-grain by anyone with brewing software and/or a good general knowledge of recipe construction.

As this book is aimed at beginners each recipe contains a pretty full walk though of each step in the brewing process. This may be good for people just starting out, but it makes searching for the process details a bit more time consuming for the experienced brewer.

Accuracy: I have issues with quite a few of the book's recommendations, for example: steeping oats, rye and base malts (they need starch conversion), using clear candi sugar (same thing as table sugar, but much more expensive), aging a beer with ¼ pound of American oak for 3 to 4 months (wow that’s a lot of oak character), and using dark extracts (light extract and grains usually gives better results and more control). He also adds 2 tsp of gypsum to almost every recipe regardless of style and without telling people to check their water (a classic Papazian-esque maneuver). In addition he says some things that are downright untrue, such as lambics must have 30% unmalted barley. There are also some editorial errors, like a large section of the directions missing from the Sour Cherry Ale recipe.

His math is also screwy in a couple places. For example his Dema Goddess Ale starts from an OG of 1.100 and ends up at 14-16% ABV with the addition of just 11 oz of sugar during incremental feedings. 11 oz of sugar would add about .006 to the OG, which means the beer would need to get down below 1.000 to get to even the low end of the ABV scale.
Readability: It is a very easy book to read with loads of great pictures. The language is very simple, with very few advanced concepts. The book does cover a wide variety of topics, so it would be a pretty interesting read for someone just getting into the hobby (sadly you'd need to get another book to read more if any of the topics really struck a chord with you). If you aren’t careful you can polish off the entire book (including the recipes) in about two hours.


There are some charts and insets which are nice, but often they are located a few pages off from where they should be. For example a blurb about dried yeast appears a couple pages after the yeast section. In several cases there is a chart next to a photo on the same topic (e.g brewing herbs/spices), but the chart and picture don't have many of the same items in common. It almost seems like the creation of the photos and charts were not coordinated like they should have been.

Overall: I’d say pick up Extreme Brewing if you really love DFH, or want a coffee table book with loads of pretty beer pictures to look at. I just don’t think it accomplishes the goal it sets out of making extreme brewing accessible to the extract brewer. In the end the book reads like someone took Complete Joy of Home Brewing and Radical Brewing, ripped out 90% of the information and stuck in some photos. Radical Brewing covers all of the same topics but goes into far greater detail and has a multitude of things that this book lacks.
The Mad Fermentationist (Mike) at 11:20 AM