Sometime even I need to have something around to drink that isn't 100 IBUs, sour, or 12% abv. Munich Helles is the everyday drinking beer of Munichers (beside dunkel) was originally brewed as a reaction to the exploding popularity of Pilsners in the early 20th century, but with a balance towards malt instead of hops.

This is the type of beer where lagers really show their strength, they let the subtle malt and hop flavors through where an estery ale would cover them up. I love a good doppelbock as much as anyone (I've got one lagering now), but a clean ale yeast would do almost as good a job in such a big malty sledgehammer of a beer.

Not too much to say about this recipe other than it is based on Jamil's from Brewing Classic Styles. I changed the hops around based on what I had on hand, but pretty much anything continental would do fine since they are primarily there for bitterness. I changed the yeast to WLP833 Bock because I wanted to use this batch as a starter for a doppelbock. In addition I made some small changes to the malt bill and mash to suit my system and the lower attenuating yeast.

The most important thing I can say is that brewing a great pale lager requires good basic brewing technique. A strong boil (to remove the DMS from the pilsener malt), a big starter (to ensure a quick start to fermentation), and good temperature control (for low esters) are the most important things to focus on. I did some minor water adjustments (CaCl in the mash, phosphoric acid in the sparge) to keep the pH down, a necessity when brewing such a pale beer in DC. 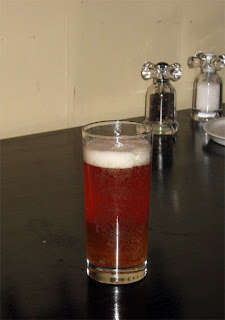 Appearance – Golden (not as dark/red as the picture suggests) with a thin white head. Head retention and texture are pretty good, but it isn't as thick as I wanted. Right out of the fridge the beer has a bit of haze, but it clears up as it warms (a short protein rest might not be a bad idea next time).

Smell – Clean lager aroma with just a hint of sulfur. The bready malts are there, but it is pretty mellow. A hint of herbal hops chase the malt, but only for the first few minutes. Rather simple combination of aromas, but all the right elements are there.

Taste – The malt plays the lead in the mouth, big and bready. Just barely enough bitterness to balance out the beer, and not any more. Good balance, just a hint of sweetness. Not a complex beer, but the flavors go together so well.

Drinkability & Notes – A great easy drinking lager, probably the best I've done. One of the only beers I have made that I could give to an average American “beer” drinker and get a good reaction.

Hell of a Good Helles

Chilled down to ~68, strained, then let settle before racking into a 5 gallon better bottle. Then I put the carboy into the 48 degree freezer to drop the rest of the way,

After ~7 hours I pitched the mostly decanted starter which had also been sitting at 48 degrees.