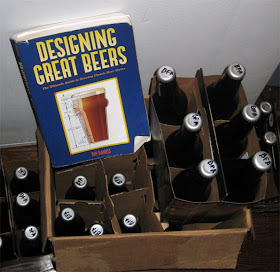 Designing Great Beers (by Ray Daniels) is a book written to teach homebrewers how to create their own recipes. It was one of the most important books in my development as a brewer because after reading it (as you might expect) I began creating most of my own recipes. It is hard for me to remember that before I read this book I didn't know more than the basics of recipe design.


It is not a gripping read that you won't be able to put down, and reading it will probably not have you brewing better beer immediately, but with some work you will learn how to construct your own beer recipes.

Part 1 covers the various aspects of designing a homebrew recipe. This including selecting malts (for gravity, color, and flavor), hops (for bitterness, flavor, and aroma), yeast (for flavor and attenuation), and a water treatment (for mash pH and flavor). It also takes you through a process to balance these different components into a complete recipe.

Daniels introduces the concept of BU:GU, that is the ratio of bitterness units to gravity units (BU=IBUs, GU= Original Gravity - 1 X 1,000 that is to say a beer that starts at 1.050 has 50 GU). This is a valuable (if over simplified) tool for quickly thinking about the sweet/bitter balance. This is one of the best mental tricks I know of for thinking about beer recipe design, and helps to show why for example a 1.050 American pale ale with 50 IBU (BU:GU = 1) tastes so much bitterer than a 1.100 English barleywine with 50 IBU(BU:GU = .5).

Like How to Brew this section contains many charts and tables about the various ingredients, but looking at them in 2009 they are a bit outdated. They are missing many hops/malts/yeasts that were not commonly available when the book was written (Amarillo, Carafa, and too many yeast strains to mention). There is also a short section on the fermentability of malt extracts, but overall this is a book aimed at people who are either all-grain or partial-mash brewers.

There is also a clear exclusion of ingredients with a Belgian origin (in the yeast chapter Irish gets a bigger section than Belgian). He also very much disparages the use of refined sugar (a hallmark of many Belgian styles) "In general, these [refined] sugars should be avoided or restricted as they add little, if anything, to the character of the beer."

Designing Great Beers like How to Brew contains lots of technical information that most brewers will never use (calculating beer color, charts about the percent of beta acids different hop varieties contain, and predicting original gravity). If you have never learned the math (or at least the concepts) behind the calculations then learning them may help you understand recipe design, but trying to learn them could give you the uncomfortable feeling that you are back in 9th grade algebra.

Designing Great Beers contains very little advice on the brewing process, so this would not be a good book for someone just starting out in the hobby or looking to make the jump to all-grain. I would suggest brewing a few kits or well tested recipes before you start inventing your own. It is hard enough to figure out if your technique is correct without having to worry about whether your recipe is the problem.

I'll cover the Part 2 under Recipes.

Accuracy: No major complaints here, but things like ingredient quality and style guidelines have changed over the last 15 years since the recipes that Daniels analyzes were entered in the NHC. Even so he mainly sticks to well established styles, so most of his advice is still rock sound. Due to the fact that this book is aimed at more experienced brewers I feel that this is not a double standard compared to the treatment I gave Complete Joy of Homebrewing, which had some similar issues but is aimed at people who have no background in homebrewing.

Recipes: Designing Great Beers does not contain a single recipe. What it has instead are detailed discussions of every aspect of recipe design for close to 40 styles and sub-styles. Each chapter starts with a brief historical look at how a group of styles developed (Stouts for example broken down into Classic, Foreign, Sweet, and Imperial). This first section often includes a few charts to track how a style's IBUs/Gravity/ABV changed through the years. This can be interesting, but can be skipped over if the history doesn't interest you.

Each chapter then goes on to discuss how to pick a malt bill, hopping schedule, water treatment, and yeast for the style. Each chapter contains a malt chart that was made by analyzing beers that made the Second Round of the NHC in 1993 and 1994. It contains the range and average percentage for each malt and the incidence of use. This gives a good overview of how different styles are built. The problem is the information is from the mid-90s, and for some styles the recipe design reflects the poor quality of some ingredients at that time (the bock recipes don't contain much Munich malt, although Daniels points out that this is not authentic). I'd also complain that sometimes he is looking at a sample of beers that is just too small, in one case just 3 beers.

Daniels does a very good job picking apart the different strategies that brewers use to tackle the same style when there are enough examples in the sample. When looking at Milds he breaks out Pale Milds (Crystal vs. No Crystal) and Dark Milds (Crystal + 1 Dark Grain, Dark Grain without Crystal, and Two Dark Grains then by the dark malt selected for each). As detailed as that is he often neglects to give a color recommendation for the crystal malt, something that can have a huge impact on the character of the beer.

My major complaint, again, is that there is not a single Belgian beer included. It may just be that the author is not a big fan of the style, or it may be that Belgian beers are considerably harder to crack with this method of analysis, but I would have liked to see a few looked at (or at least a discussion of a general way to tackle them).

Readability: Each section is well put together and coherent, but can be a bit dry unless you are in the process of actively designing a recipe. At the end of each chapter there is a great half page bulleted summary of his "best recommendation" for each facet of recipe design for the styles included in the chapter.

This is not the sort of book that I pick back up to pass an hour, but I think it is a perfect reference book when I am sitting in front of Promash trying to figure out what sort of hops I want to use to bitter my Vienna lager. Since I can't find a better place to put this, I will note that the spine of the book is a bit delicate, my copy now has a few free floating pages near the center.

I would love to see this book revised based on a sample of current NHC second round beer recipes (although with the popularity of Jamil's recipes it may just look like Brewing Classic Styles in graph form). I'd also like to see it expanded to a greater variety of styles. Even if you are not interested in creating recipes for classic styles the techniques in this book can be applied to get that crazy beer that is in your mind into bottles.
The Mad Fermentationist (Mike) at 6:34 PM