Lambic the Real King of Funk 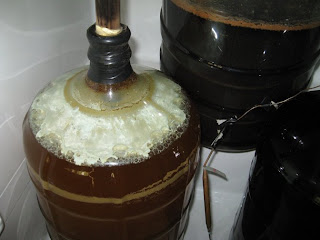 Lambics are probably the most widely known and iconic of the sour/funky beers. Spontaneously fermented by microbes that live in the Belgian air and in the wood of the brewery, and then aged for years before consumption, they are to funk what the Double IPA is to hops.

In many ways it is the most unique style to brew, with nearly ever step diverging from standard modern brewing procedures. I certainly didn't follow the traditional methods as closely as some people do, but I made an attempt to at least carry on the spirit of each step.

The traditional grist is composed of approximately 70% pilsener malt and 30% raw wheat. I used flaked raw wheat because that is what the local homebrew store had, and I added a bit of Munich malt for some added maltiness because my shorter mash and boil would not develop the same level of melanoidins the traditional method would have.

Traditionally a turbid mash is used which includes up to ten steps that aim to preserve a complex blend of dextrins and starches which the various strains of yeast and bacteria will feed on during the long fermentation. I did a simpler procedure, called the Wyeast Mash from Wild Brews, which is a variant on a cereal mash, boiling all the wheat with 10% of the barley before adding the remainder of the malt and stabilizing at a high saccharification temperature of 158. In either method the sparge water is extremely hot to aid in the extraction (tannins and other unpleasant molecules which are extracted and would normally result in an unpleasant beer are either consumed by the microbes or fall out of solution during maturation). 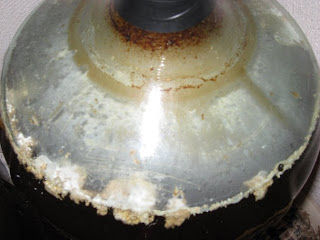 Traditionally the long hot sparge results in such a dilute wort that a 3-4 hour long boil is needed to condense it to around 1.050. In my case I did not have the pot size or heat source required for such a long boil, so I collected 7 gallons and boiled for 2 hours. My original gravity was over 1.070 (with an amazing 90% efficiency), but I had to top off with boiled and chilled water a couple times to account for blowoff, evaporation, and sampling, so my effective OG is about 1.058.

Traditionally huge amounts (~1 oz per gallon) of aged hops are boiled with the wort. As hops age they loose the alpha acids that isomerize to give beer its bitterness, but their preservative power is saved. This preservative power allows them to fight off the more aggressive microbes that would make the beer harshly acidic or funky. I agree that this is a necessary part of the brewing process if you are spontaneously fermenting, but I don't see the point in an inoculated lambic like the one I brewed. When you are boiling the wort, quickly chilling, and then adding the microbes of your choice, it doesn't seem like there is any more chance of unpleasant "infection" than in any other sour beer (most of which do not use copious amounts of aged hops).

Unlike every other style lambics spend years in the same primary fermenter. The Brettanomyces uses the autolysing (rupturing) Saccharomyces cells for nutrition during the prolonged souring period. Traditionally the fermenter is a used oak barrel that has had most of the flavor stripped out of it already. The oxygen that slowly diffuses in through the wood aids some of their microbes as they slowly work. To mimic this I used a toasted oak peg stuck through the neck of the carboy, I found several problems with this method as I discussed in the past.

After the blender deems a batch of lambic to be complete, it is either blended with younger and/or older batches to make a gueuze, bottled alone to be an unblended lambic, or aged with fruit for months to make a fruit lambic (Cherries - Kriek, and Raspberries -Framboise being the two most popular).

I started my my first attempt at the style nearly two years ago, and it is still sitting in primary. The top photo is what it looked like in December 2006 with a nice thick pellicle, and the bottom photo is from April 2008 with the pellicle beginning to reform after it was damaged. I am planning on priming and bottling half the batch this summer and aging the rest on blueberries. I figure what better way to draw a distinction between it and the traditional Belgian examples than to use a traditionally American fruit (apologies to Cantillon Blåbær Lambik).

Wyeast mash from Wild Brews:
Wheat and 11 oz of crushed barley mixed with 4.25 gallons of 143 degree water that had 2 g gypsum and 3 g CaCl. Mixture boiled for 30 minutes. 1 Gallon of cold water and remainder of the grain to get to 158 degrees. Rested for 105 minutes, heat applied and stirred several times to keep temp in the 150's. Grain strained into the cooler with 4 oz rice hulls and sparged first with the extra liquid from the mash, then 200 degree water with 1 tsp each gypsum and CaCl (scale's battery broke, so no weights). 7 gallons collected, final runnings were still 1.025 (not as low as tradition, but I didn't think I could take more wort and still get a good boil.)

2 year old hops 3.3 AA listed, adjusted down to 2.5 AA, left open to the summer air for 1 month prior to brewing. Boiled down to 4.5 gallons to allow for primary in a 5 gallon carboy, intended to do a longer boil, but got better evaporation than expected.

OG 1.072 (pretty high, but it will get topped up with water) Cooled to 70 degrees, strained out hops, hit with 20 seconds pure O2 and pitched a room temperature smack-pack of Wyeast lambic blend. Put into fridge at 65 degrees. No activity the next morning.

9/4/06 Gave it a shake to get the yeast moving, it worked with a thin krausen soon rising.

9/6/06 It stinks (sulfur), the brownish krausen is still at only a half inch or so and the temp strip reads 69 degrees.

9/10/06 Krausen completely fallen, so I topped up with about a gallon of boiled and chilled water.Topped with oak chair leg, toasted and soaked/boiled, then used to top carboy after primary hopefully this will transfer oxygen into carboy, let co2 out give the Brett a place to live and impart a small amount of flavor. Fridge left at 65 for extended maturation, lots of CO2 still being released, visible bubbles and audible hissing noise.

12/24/06 Looking good, except some more of the beer escaped through the wooden peg. Nice funky krausen going on in the carboy, the trub at the bottom appears to be smaller than before.

8/12/07 Took out the wooden peg to get a sample. It was so hard to remove that I decided to just go with an airlock for the rest of maturation. The flavor is still not very sour, but it is certainly funky.

12/25/07 Moved from the cool closet off the garage to the closet in my old bedroom. This broke up the remnants of the pellicle.

My plan is to bottle half this summer, and age the other half on some blueberries.

Here is some info I dug up on the Cantillon Blueberry Lambic:
Cantillon Blåbær Lambik
"The beer has actually been made two times, first in August 2005 where 25kg blueberries were send to the brewery for the making of 110 litres of blueberry lambic. Unfortunately the berries were in the barrel for too long making half of the batch go sour (!). Only the part of the beer that wasn't in direct contact with the berries turned out good, leaving only 50 bottles..!!
Too few to put on the market. So in December 2006 Jeppe and his wife drove to Belgium with 50kg of blueberries for the making of the second batch (this time 225 litres!) The beer fermented for approx. 1½ month before getting bottled in January."

The volume to weight quoted translates to 4.66 lbs for my 2.5 gallons. I am hoping to put the beer onto blueberries July 18th, and bottle around a month later.

7/18/08 Blended the beer 4:1 with my 1 year old Flanders Pale ale to help cut the strong acidity. Then bottled half of it with 3/4 cup of light DME. I didn't add any extra yeast as the younger beer should have enough viable cells to carbonate the beer. The other half of the batch was racked onto 4.4 lbs of local blueberries that I briefly froze to help break down the cell walls.

8/11/08 The blueberry half is delicious, but still too sweet at 1.010 to bottle. It should be ready to go by this winter. The plain bottles haven't carbonated yet, but I expected it to take awhile.