Appearance – Budweiser pale-yellow with bubbles coursing through it. Nice thick white head with audible crackling from the bubbles bursting.

Smell – Aroma has a strong wheat note and some sour/funk in the nose.

Taste – Plenty of smooth lactic acid. There is a remnant of the Pils malt (or possibly DMS) in the after taste, this fades after the first half of my sample. Not a particularly complex flavor, sort of like a sour hard apple cider. 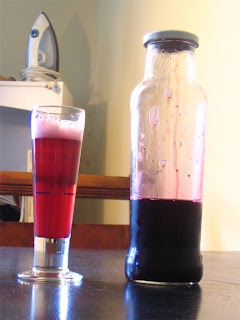 Drinkability & Notes – Very easy to drink, but that aftertaste takes away from it a bit. If I had it to do over I would probably give the beer a short boil to drive off some of the DMS/Pils flavor (or use a higher ratio of wheat to Pils malt).

Appearance– Deep purple/red with a pretty pink head. Head retention is not as good as the plain sample, but it still stays around for a bit. A few blueberry seeds are visible at the bottom of the glass.

Smell – Light blueberry pie, with just a hint of that wheat aroma coming through.

Taste – Much smoother flavor, almost none of the Pils malt character from the plain version. The blueberry is there, but it is not as strong as I expected. The sweetness really changes the perception of the beer.

Mouthfeel – Adding the syrup knocked out some of the carbonation and boosted the sweetness, particularly linger in the aftertaste. I liked the snappier, crisper finish on the plain one, but this one certainly has the edge in complexity.

Drinkability & Notes – Tasty and again very refreshing, but I would have liked more blueberry flavor and less sweetness. I think the fermentation of the raw blueberries that I'll be adding to my lambic will result in a more pleasing beer (but probably not as refreshing). I bet this would be a terrific gateway beer to give to people at a summer BBQ. 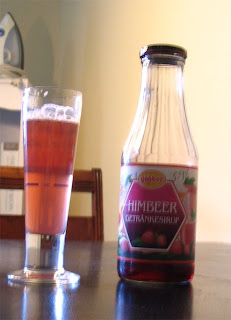 Smell – Light raspberries with some of the lactic sourness poking through.

Taste – Sweeter than the blueberry version, even with less syrup. Tastes rather flat/dull, there is some raspberry, but the sweetness deadens the rest of the flavors. The sweetness lingers leaving the tongue with a slightly unpleasant coated feeling.

Mouthfeel – Carbonation seems sharper than in the blueberry version, but the body seems a bit thinner.

Drinkability & Notes – Solid, but the not terrific. My Berliner Weisse with the raspberry syrup went over very well with people at a party a few weeks back, definitely a good option if you are looking to make something along the lines of Lindemans Framboise (sweet/sour, and fruity). 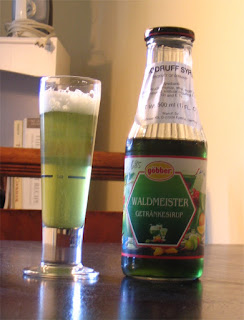 Appearance – St. Patrick's Day green body with a touch of green in the head. Head retention is sub par.

Smell – It smells like childhood, some weird combination of Lucky Charms and Play-doh. Basically no evidence of the wheat or acid of the base beer.

Taste – Sweet Luck Charms marshmallows with some wheat and sourness. The sweetness seems less intense than the raspberry, but it still lingers unpleasantly.

Drinkability & Notes – It is a interesting flavor to be sure, but I'd be hard pressed to finish off a pint of this.

Overall thoughts
The commercial syrups are worth a try if you have never had them before, but neither of the ones I found at a local German Cafe really give you a great flavor and they will both add too much sweetness to preserve the quenching acidity. There are a world of other homemade syrups that might be good in this beer. Sure its a tasty/refreshing style on its own, but it is also a beautiful clean canvass for other homemade syrup options.
The Mad Fermentationist (Mike) at 6:08 PM