Not crying over sour milk - Yogurt 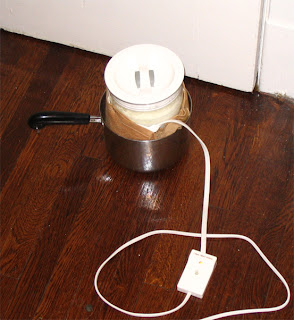 My first foray into the world of fermented dairy. This is one the most diverse areas of fermentation including such standard items as sour cream, and buttermilk, gourmet items such as crème fraîche, cultured butter, and kefir, not to mention the literally hundreds of varieties of cheese.

My basic method was stolen from Good Eats, but it is pretty much the same method everyone else seems to use (except for the genius use of a heating pad to maintain the correct temperature).

I took 1/2 gallon of 2% milk (you can use use milk from any animal and with any percentage of fat you want) and heated it to 120 degrees. I then poured all of it except 1 cup into a cylindrical plastic container, the rest was blended with two 6 oz containers of store bought yogurt with live cultures (make sure the back says it "contains live cultures"). I poured the thinned yogurt into the container with the warm milk. I placed the container with lid on into a pot and wrapped it with a a heating pad set to high.

You would have to test out your heating pad to determine the correct setting to keep a liquid at 115 degrees and make sure that your heating pad doesn't have an auto-shutoff timer like the one I bought (luckily my mother was willing to swap).

I then went to sleep, when I woke up in the morning (8 hours later) I had a thick tangy yogurt like substance. I took a temperature reading and it was 114, pretty good for my first try. I opted not to add any powdered milk, which many recipes call for to add additional protein to enhance coagulation (acid coagulates protein, the same reaction gives the citrus juice marinated seafood in ceviche its "cooked" texture). The longer you leave the yogurt before putting into the refrigerator the more acid will be produced by the various lactic acid bacteria (including our beer souring friend lactobacillus), and the firmer the resulting yogurt will be. 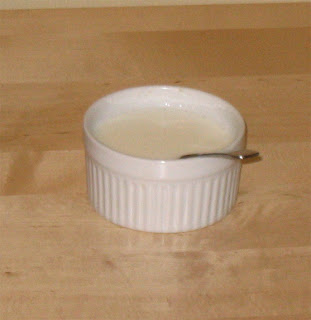 After a few hours in the fridge to cool down (115 degree yogurt wasn't that appealing to me) the homemade yogurt had a creamy mouthfeel with a nice lingering tangy flavor. I thought it had a fresher "milky" flavor and aroma than commercial yogurt, which could be the result of the organic milk I used or just the fact that I have no experience critically evaluating yogurt. The yogurt kept well in the fridge until it was all gone (after 5 days).

I plan to add some dried milk to see how much of a thickening difference it makes. I also plan on playing with different brands of yogurt to inoculate. Much like sourdough you could continually save a cup of yogurt to inoculate your next batch, but I doubt I have the commitment for that.
The Mad Fermentationist (Mike) at 7:09 PM