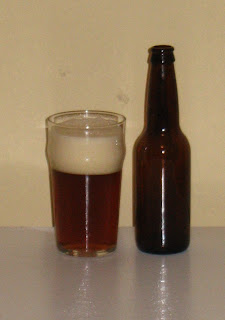 In September I used the Cascades that I grew at my parents' house and then dried in the microwave in a simple American pale ale. I used Simcoe to bitter since I didn't have enough of my home grown Cascades to make that much beer, and I don't know what their alpha acid % is so it would be impossible to figure out how much I would need to use as the bittering addition.

I used Golden Promise from Scotland as the basemalt, I think it adds some mildly toasty notes without being as biscuity as some other British pale malts. CaraHell and CaraVienna are both pale crystal/cara malts which add some sweetness, body, and a mild caramel flavor. Victory contributes toastiness as well reinforcing the flavor from the Golden Promise. Melanoidin (similar to Aromatic Malt) is like a really dark Munich malt which adds a powerful "malt" flavor, melanoidins are byproducts of the Maillard reactions which add depth of flavor (they are also created in a decoction mash).

Aroma – Slight caramel, with some clean citrus hops. The hops have faded pretty quickly, but are still rather nice. There is a floral complexity that I can't figure out, either hops or mild yeast esters.

Appearance – Light honey-amber, with just a bit of hoppy haze. The white head last the entire time leaving patchy lacing on the sides of the glass.

Taste – Nice and toasty, with a clean hop bitterness. The beer is nice a dry, with just enough hoppiness to give it some bite. The bitterness is not as aggressive as even a Sierra Nevada, the balance is closer to an English Pale Ale. Certainly not really complex, and there are no discernible off flavors.

Mouthfeel – Medium body with firm carbonation. This is exactly what a easy drinking pale ale should feel like.

Drinkability/Notes – A solid APA, that is a bit lacking in the hop aroma. At the least this proves that microwave drying hops is a reasonable idea. It is hard to tell if the lower than expected hop aroma can be traced to my drying method, or simply the growing conditions of my second year cascade plant.

Added 1 gram of gypsum to the mash. 1 tsp phosphoric acid to the sparge. 1 gram gypsum to the boil. Cascades were home grown and dried in the microwave. Simcoe were about a year old, AA% adjusted down from 13%.

Good strong boil, added flame out hops after 1 minute of cooling. Got the beer down to around 80 before straining and putting into the temp controlled freezer.

Yeast pitched straight from the pack after the beer cooled overnight.

Fermentation chugging along nicely by 18 hours at an ambient temperature of 60 degrees.

9/23/07 Transferred to secondary, pretty good flavor, yeasty and a bit weak on the hops.