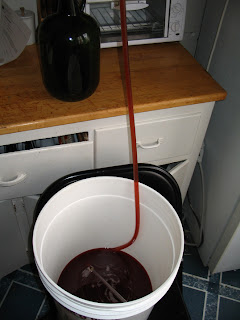 This was my second attempt to clone Pizza Port's Mo' Betta Bretta. First attempt This time around I made two significant tweaks to my recipe.

First and most importantly I switched the strain of Brett from claussenii to anomalus which is the strain used in the original. Claussenii and anomalus both have their origins in barrel aged English strong ales, and are both subtle compared to the Belgian Strains.

Second I doubled the amount of acid malt to increase the sourness and instead of adding it to the mash where the buffering capabilities of the mash may have canceled much of it out I mashed it separately and added it directly to the boil. The draw back of this method is that the pH of a mash of just acid malt is too low to allow for conversion, so some starch certainly got into the finished beer.

I also followed up my Pinot Noir and dried sour cherry version the first Mo' Betta batch, by doing the same thing but with fresh sour cherries. In 2 gallons I used 4 lbs of sour cherries from my local farmers market that I breifly froze to break up the cell walls. I added half a bottle of Pinot Noir from Bear Boat, which located in the Russian River Valley. In retrospect I think I added too much wine, the first batch used about the same amount but part of that was tossed out after it was used to rehydrate the dried sour cherries.

Notched the barley crusher down a hair to try and combat the recent string of low efficiency.

Pulled a few quarts of liquid off the mash, brought to a boil and returned to raise the temp for a few minutes at the end of the mash. Nice long slow sparge to collect 5 gallons @ 1.053 (not sure if it was the smaller crush, or the mash out, but this is the best eff I have had in ages, 76% not including the sour malt)

The sauermalt was mashed on its own for 45 minutes @ 152, then drained through a sieve and sparged with a bit of the collected wort. It turned out pretty cloudy, but had a nice yogurt like tang to it. Ended up with 2 quarts after straining that I added with 5 minutes left in the boil. Not much evidence of its addition in the cooled wort.

Chilled to high 80s with chiller then placed in 60 degree freezer to get it to pitching temps.

After 6 hours I assumed it was cool, topped off with 1 quart of Evian water and hit it with 1 minute of oxygen. I then added about 2/3 of a mason jar of slurry from the Brett Pale Ale

After 24 hours I gave the carboy a shake and turned the temp up to 70. In the morning fermentation was pretty active, so I put the temp back down to 65.

7/11/07 Added 4 lbs fresh (frozen then thawed) sour cherries that I got at the farmers market to about 2 gallons of the beer. The rest got transferred to secondary in two 4L jugs.

7/16/07 Added 1/2 bottle of Bear Boat Pinot Noir to the cherry half. Took a sample and it was a light pink with a great soft cherry character and nice complexity, really looking forward to this one.

7/28/07 Racked off the cherries into 2 one gallon jugs. The wine tastes too intense, hopefully it will mellow.

6/23/08 Tasting of the plain version and the cherry vanilla.

A poor quality video, but you can sort of see how violent a 100% Brett fermentation can get:

The Mad Fermentationist (Mike) at 8:25 PM