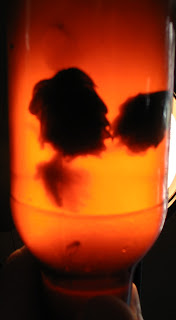 Last night I bottled my Mo' Betta Bretta clone. I got about 2 six packs and 3 bombers from both the plain and cherry soaked batches. Both batches tasted good, although the cherry batch definitely tastes more funky and immature than the plain version.

To create some variety I added 4 dried hop cones of 4 different varieties (Centennial, Simcoe, Mt. Hood and Sterling) to 4 empty bottles before filling with the plain batch. I tried to select intact cones so that they would be easy to strain out of the beer for serving and so far all the hops appear to have remained whole except for the Sterling which broken down almost immediately.

I got the idea from a special version that LaConner Brewing did of their IPA for Bottleworks in Seattle that had whole hops added to each bottle. Some companies dry hop in the keg (Russian River does it on Pliny the Younger), but as I don't keg that wasn't an option. Bottle hopping also works well in this case because I wanted to leave the bulk of the beer plain, plus now I'll get to try out four different dry hopped versions.

If consumed reasonably quickly (exposure to whole hops for an extended period of time can cause grassy off flavors) this should give the unique experience of having the hops in contact with the beer up until moments before serving. The drawback is that the hops provide loads of nucleation sites for bubbles to form which can lead to rapid foaming. I have heard several stories of broken bottles and gushers from people who had the bottle hopped LaConner IPA

It'll be another few weeks before these beers are carbonated enough to try, but I'm really excited to see how the different versions compare.
The Mad Fermentationist (Mike) at 2:38 PM