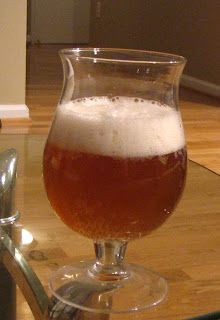 I often see recipes posted on the internet that include no mention of how the beer turned out, and in the rare case that they do mention what the beer tastes like it is brief and vague. I hope to post reviews and results for all the recipes I talk about on the site, in fact I'd like to do updates as time goes on to show how age can effect the beers I make.

48 days ago I brewed this beer, and it's now been in the bottle for 2 weeks. I went with one of the bottles that was spiked with dry US-56.

Appearance – I had left the bottle in the fridge for 24 hours before opening, even with 15 minutes to warm up before pouring it still had plenty of chill haze. The head is initially vigorous, creamy and stark white. However, it sinks pretty quickly leaving just a thin spotty covering. As the beer warms it gradually begins to clear, but never gets crystal.

Smell – Opens up with lots of lemons, and a mild herbal/grassy/spicy hop aroma. There is a light earthy-funkiness hiding behind, but it certainly is not a primary aroma. Overall pretty clean, but there is enough going on to let you know this is not a run of the standard style.

Taste – Lightly tart, with bready malt. Plenty of esters, apples and pears for the most part. There are some barnyard notes as I get closer to the bottom of the glass. It's pretty well balanced, the hops are not assertive, but they certainly are stronger than in most traditional “wild” beers.

Mouthfeel – Prickly carbonation with a medium body. Feels surprisingly full for a beer that finished at 1.009.

Drinkability & Notes – Certainly still tastes young, but damn tasty for a Brett beer that only has two weeks in the bottle. I'm looking forward to seeing how this develops over the coming months.