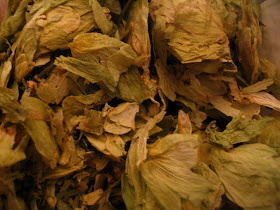 Last summer I wanted to teach myself about the flavors and aromas that different American hops can contribute to beer. After watching an episode of Basic Brewing Video about I devised an experiment to test five hop varieties with just one batch of beer.

After the sparge I boiled all of the wort I collected for 60 minutes. After the main boil was complete I repeatedly took one gallon out of the boil kettle and brought it back up to a boil and added a single variety of hops (all leaf hops from freshops.com) in an attempt to hit around 46 IBUs to balance out the 1.062 OG.

The human palate is only accurate to about 5 IBUs (plus the formulas we use are just estimates), so you just have to get close to eliminate any impact that different IBU levels would have.

Each batch was then chilled and poured into its own jug with some dry US-56 yeast.

After a week of fermentation each jug got 3/8 oz of the same hop used in the boil as a dry hop.

This experiment also marked my first appearance on Basic Brewing Radio give the show a listen for more detailed tasting notes here.

If you are too lazy to do this experiment yourself here is a list I have compiled of list of some beers that use either just one hop or are predominately hopped with one variety.

In addition some brewpubs will do single hop IPA/APAs series to educate people on the different hops varieties.
The Mad Fermentationist (Mike) at 6:34 PM