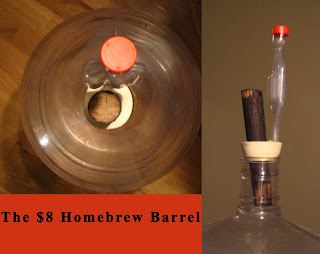 First off I need to credit Raj Apte. Certainly one of my fermentational inspirations and a pioneer (or would it be a re-pioneer?) in many home fermentation media including ginger beer plant and sour beers.


After reading about and listening to his description of the “$1 Homebrew Barrel" I decided to make two and use them on a Flanders Red and a Lambic I brewed last summer. Those two beers still have a few months/years of aging in front of them so I can't give a definitive evaluation of their flavor, but the last time I sampled them they were both doing well.

The “$1 Homebrew Barrel" is pretty simple, take a tapered piece of oak (like an unfinished chair leg from Home Depot) cut it off, toast it over a flame, wrap the middle with Teflon tape and jam it through the neck of the carboy and into your beer. According to tests Raj has run the oxygen transfer rate of this system is similar to that of the large (20,000 L) tanks Rodenbach uses to age their sour red. Because of how large these tanks are their surface to volume ratio is very low meaning that they transfer less oxygen to the beer than smaller (55-65 gallon) commercial wine barrels and far less than the (5-15 gallon) barrels some homebrewers use. The other advantage of the system is that they are far cheaper to make and require virtually no maintenance.

However, I ran into several problems while using the system:

1. The wood swells after absorbing wort/beer. This makes removing the oak from the neck of the bottle very difficult, and dangerous since you are stressing the glass carboy. In my case I actually cracked the neck of the carboy that the Flanders Red in in, rather minor so I just left the beer in there and wrapped the neck with electrical tape for reinforcement. Picture

2. When pressure builds up faster than it can diffuse out of the wood beer is forced out through the wood. This can happen either because of a strong secondary Brettanomyces fermentation or because the temperature of the carboy rises causing CO2 to come out of solution faster than it can diffuse through the wood. This is an annoyance and can also lead to poor sanitation, in my case after some liquid got out it allowed mold to start growing on the bottom of the fridge that the carboys were stored in.

Despite these difficulties I think that this is a good system that could be great with just a couple of tweaks.

My Solution:
I have personally stopped using glass, it posses the risk of suddenly breaking and it can be pretty heavy when full of beer. As a result I now use Better Bottle, so that is what I used for my project. The manufacturer of Better Bottles claims that they are impermeable to oxygen, but that claim is still up for debate in the homebrewing community.

The larger stopper Better Bottles use also allows room for a wooden peg and an airlock to be put through it. Having the wood wedged into the stopper will make removal easy and the airlock will prevent pressure from building up by allowing CO2 to escape much faster than it can diffuse through the wood.

I started with a trimmed and toasted oak chair leg prepared just as Raj described (cut to about 7 inches and toasted over the flame from my turkey fryer). I then took the rubber stopper and used a knife to cut a new hole near one edge for the airlock. I then used the knife and slowly whittled/twisted/gouged a large hole starting near the other edge and going just passed the original airlock hole. This took about 20 minutes, but really wasn't that difficult once I got the hang of it. There is a small gap in one spot between the stopper and the wood, I will seal this with some food grade silicone sealant.

All in all the project cost me about $8. About $5 for the oak, and $1.5 each for the stopper and airlock. Not bad when you consider a new homebrew scale barrel is at least $150 and would let in far more oxygen and would impart too much oak character to the first few beers that were aged in it.

This system is now in use aging my Funky Pale Ale
The Mad Fermentationist (Mike) at 6:30 PM