Audrey invited her coworkers over for a mini-Oktoberfest in our backyard. In preperation, she brewed a batch that most of them would enjoy, a low-ABV ESB-ish malty ale that looks a bit like an Oktoberfest. As you can tell from the drop in post-frequency, more of my time is being sucked up by Sapwood Cellars (we're reviewing the lease now). Someone is going to have to keep the taps filled at home!

Her plan was to ferment with White Labs 002 English Ale. The Fuller's strain is a quick fermenting and flocculating yeast perfect in low-gravity ales given its low attenuation (for example). Mild enough yeastiness that it shouldn't be off-putting to casual craft beer drinkers. When we stopped by the local homebrew store they were down to a single tube, enough of an excuse for a split-batch. The description of WLP013 (London Ale) with an "oakey ester character" appealed to Audrey, and I had never used it before. I have used the Wyeast equivalent in name and origin (WY1028) in batches of Courage Russian Imperial Stout, but not for anything similar to this.

The shop was also out of East Kent Goldings, so we swapped to Challenger for the aroma addition. Challenger isn't as orangey as EKG, but they have a wonderfully mellow herbaceous quality. Out of flaked wheat too, so we opted for torrified "puffed" wheat (something Dan Paquette of Pretty Things suggested to Nathan and I for bitters years ago). Torrified grains requires milling, but are gelatinized like flaked wheat and thus can be added directly to the mash without pre-cooking. It contributes a slightly toasty flavor too. Given substitutions for yeast, malt, and hops it likely isn't a surprise that I usually do my homebrew shopping online! 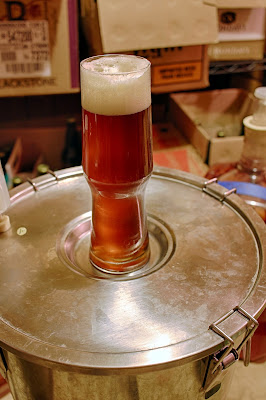 Taste – Toastiness increases to support the caramel, and is joined by a stronger herbal hop-note. Well rounded malt flavor. Mild bitterness in the tail. No alcohol presence. Bare hint of diacetyl-butterscotch as it reaches room-temperature.

Mouthfeel – Medium body, medium carbonation. Just a hair of astringency in the finish.

Changes for Next Time – It would be difficult to change it a little and improve it. A local maximum. Not my favorite English session ale, I tend to prefer brighter and hoppier, but I don’t think this would improve without fundamentally changing what it is. 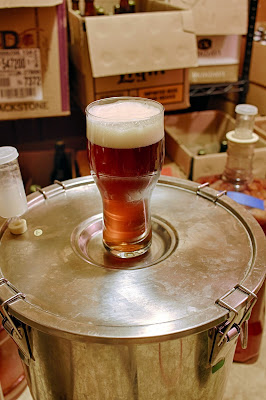 Appearance – Similar, although the head isn’t quite as long-lasting or sticky.

Taste – Not as direct as the other half. The malt isn’t as clear and fresh. The hops are more saturated and full tasting. Similar mellow bitterness.

Mouthfeel – A hair fuller, without the mild astringency. Carbonation is a bit higher as I poured this one second.

Drinkability & Notes – I’d be less-certain of what this one is. The esters feel more distracting in this malt-focused beer. I’d actually been enjoying this one more than the other, but side-by-side it doesn’t work as well as I’d though.

Changes for Next Time – I’d go even hoppier on this one to play-off the yeast. Double the Challenger!

Chilled to 80F, left at 63F overnight to cool. In the morning, pitched WLP002 into FV2, WLP013 into FV1. Both fresh packs (May and June production). Shook to aerate, left at 63F to ferment. The WLP013 half was fermenting well by the next day, but the WLP002 half wasn't really rocking until day three.

I get a commission if you buy something after clicking the links to MoreBeer/Amazon/Adventures in Homebrewing!
The Mad Fermentationist (Mike) at 7:23 PM