Brew a variety weird things, sometimes get weird results. While my first accidentally-double-sulfited attempt at a LODO Pilsner was meh, the other half of the wort (recipe) fermented with Bootleg Biology’s Mad Fermentationist Saison Blend was a terribly sulfry, eggy, farty mess. The Brulosophy LODO experiment ran into similar (less severe) sulfur issues even with the correct dosage of metabisulfite. What’s happening? 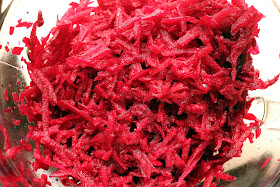 Most of the aromatic sulfur compounds in beer are relatively volatile. Yeast are required to convert the other common fermentation off-flavors, like diacetyl and acetaldehyde, into relatively flavorless compounds. Sulfur aromatics can be carried out of the beer by CO2, either from the yeast or artificially by force-carbonating and degassing. Another approach is to precipitate the sulfur as copper sulfate. I’ve visited breweries that recirculate through a short length of copper pipe to accomplish this.

All beers contain sulfate (SO4) thanks to contributions from the water and malt. Sulfate doesn't taste like sulfur, although it can contribute a mineral off-flavor in excess. While some (especially lager) strains produce above-threshold sulfur aromatics normally, usually these blow-off on their own unless fermentation is abnormally cold, pressurized, or weak. When you add bisulfite (HSO3) in the form of sodium metabisulfite (SMB) as an oxygen scavenger it releases free sulfur dioxide (SO2) most of which oxidizes into sulfate or off-gases. What happens to the remainder? Well  at least some of it ends up as foul hydrogen sulfide (H2S). So in LODO Brewing, the SMB dosage has to be reduced if you are taste sulfur in the finished beer. Relevant research for wine making. 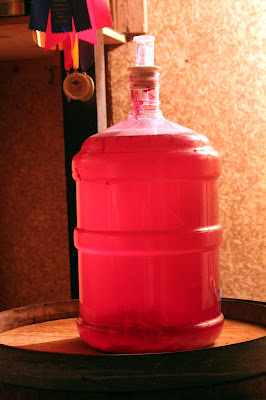 Rather than turning to copper, or intentional oxidation, I decided to add three shredded beets (14 oz) to secondary. My theory was that beets’ sugar would cause the yeast to scrub the sulfur while their earthy flavor complimented the yeast hiding whatever sulfur remained. By sheer luck it worked! Not to say it is a perfect beer, but it is drinkable and the sulfur was gone after a few months... Not exactly a solution built for a commercial brewery with a sulfury lager. I could have added fruit to accomplish the same goal, but berry saisons usually fall flat without acidity or sweetness behind the aromatics.

I shared a growler of the beer with Todd Boera from Fonta Flora last week while he was brewing a collaboration at Right Proper. He gave some positive feedback (no sulfur, nice beet expression). I had loosely based my amounts and technique on the recipe for his Beets, Rhymes, and Life in Stan’s fascinating Brewing Local. I also got to share my Juniper Kviek with Marika and Aaron from Scratch Brewing, she said that it reminded her of their Sahti (not a big surprise given we cribbed the Eastern Red Cedar additions from that recipe in their Homebrewer’s Almanac).

The local NPR affiliate stopped by that day for a story on the collaboration and changes to the DC beer scene: Take Time to Smell the Beer 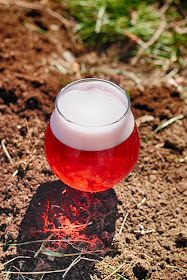 Smell – Earthy, loamy, beety. Still fresh, maybe a hint of cherry and spice from the Brett. The beet flavor isn’t overpowering, this is just a mild saison given the low gravity, 100% Pilsner malt, and lack of natural conditioning.

Appearance – Shocking magenta with a slight haze. Todd mentioned that they really see the color of beets dissipate in the bottle, but not in the keg. No idea what causes it though (pH? Fermentation? Doesn't seem to be oxidation). Head has just a hint of pink for the short time it stays around.

Taste – Mildly spicy yeast, fresh earthy beets in the finish. Minimal sweetness, pretty dry, clearly whatever leached from the shredded beets was fermentable. A hint of bitterness, but no other hop character. Just a touch of sulfur, thankfully!

Mouthfeel – Light and thin. Medium-plus carbonation. Not far from seltzer.

Drinkability & Notes – Bright, weird, and refreshing. A bit single note with the beets, but it is a remarkable improvement from the train wreck it was!

Changes for Next Time – Less SMB. A maltier saison would support the beets better. I’d like to taste it with a little citrus zest and/or ginger as well... so that's what I did!

With the keg half empty I shredded 70 g of ginger into a French press, steeping it with a cup of boiling water for an hour. It's a technique I used in the blog's infancy to make Ginger Beer. I added half of this intense tea to the keg along with the zest of one blood orange.

Smell – Assertive spicy fresh ginger layered onto the earthiness. Reminds me of a Reed’s Ginger Beer rather than Ommegang Hennepin (which has a touch of ginger). Citrus is in a supporting role.

Taste – Ginger and citrus are there in the flavor as well, but they leave more room for the beet. The earthiness is mellower. Yeast character is the odd one out. Surprisingly brings out the sulfur a bit more in the finish, not objectionable though.

Mouthfeel – The ginger adds a tickle of heat at the end, but otherwise the same light quenching body.

Drinkability & Notes – A more crowd-pleasing beer, less of a study on vegetable beer - the topic of my most recently submitted BYO Advanced Brewing article (subscribe). The potent ginger makes me think cocktail more than beer. Less interesting, but more drinkable and food-friendly.

Changes for Next Time – Less ginger, or a bolder base beer. Interested to see if it calms down in a week or two.
The Mad Fermentationist (Mike) at 8:27 PM