It is interesting to drink two glasses of beer side-by-side made from wort separated 18 months ago (recipe post). In addition to the recipe differences between these two Adam-variants (maple syrup and bourbon vs. dark candi syrup and calvados) the aging and serving were also different. I recently reconnected the maple/bourbon half (tasting) to the stout/nitro tap now that the weather has cooled off. The candi/calvados half has been aged at cellar temperature in bottles. The maple half is cleaner, with less dark fruit. Its ethanol is also more up front, although it is also a somewhat stronger beer. 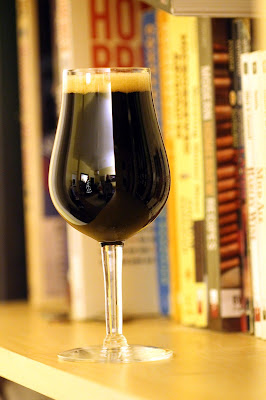 Smell – Interesting blend of dark fruit and earthy smoke. Much less direct than the maple-bourbon. The smoke melds in with dried fruit, caramel, and aged maltiness.

Mouthfeel – Full, but the medium carbonation is a bit disruptive, more than I’d prefer.

Drinkability & Notes – Warmer aging and lower alcohol have resulted in a beer that has aged faster and perhaps peaked younger. The smoke, intense malt, and fruit-brandy blend into a unique combination I haven’t tasted before. This beer is based on a German style as brewed by an American brewery with Scottish yeast and malt, infused with Belgian candi syrup and French apple brandy... a real mutt!

Changes for Next Time – Clean up my bottling process… given that approximately one in three bottles have picked up a mild Brett character. Otherwise the "clean" bottles are what I wanted them to be! Still haven't had the beer that inspired it, Hair of the Dog's Matt, so can't judge how close I came.

Bonus Quick Tasting: Hoppy Halloween Adam
Before flying back to DC after a couple days in Fargo, ND for Hoppy Halloween 2015, I stopped by a brew day a few local homebrewers were having at Eric Sanders' house. They were brewing a 20 gallon batch of Adambier, so I brought along the last bottles of my original and "authentic" batches. When I bumped Tom Roan (the guy who had coordinated the whole thing) at NHC in Baltimore, he handed me a couple bottles of that batch (plus one of his delicious wheat wine)! Finally getting around to drinking one now that a rich smoky malty beer sounds good! 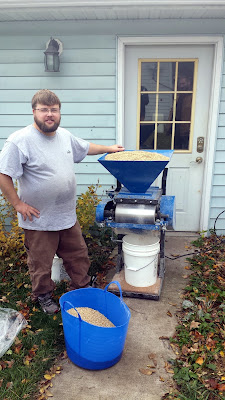 The results are really pleasant, good balance of intense-malt and apparent smoke. Dark fruit is more subdued than mine. The result is somewhere between my more and less authentic batches. Interested to try a sample of the version they fermented with Roeselare some day! 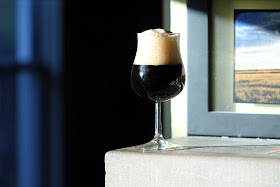 The Mad Fermentationist (Mike) at 5:57 PM