There is no reason a sour beer requires 12-36 months to acidify. Brewers have devised a  wide variety of methods to cut souring down to days or weeks: sour mashing, kettle souring, splitting the wort, lactic acid reactor etc. The issue is that extending a mixed-fermentation produces not only acidity, but also a delicate array of acids, alcohols, esters, and phenols from the waves of microbial actors. That is what no one has yet developed a "quick" method to replicate, although some are good enough for loading in fruit or dry hops!

I wasn’t planning to brew with Wyeast’s De Bom Sour Blend when they released it for July-September 2014, but Rebel Brewer tossed in an extra pack with an order. My friend Pete joined me for a test batch of saison on my then new 10 gallon system, and that made for a good enough excuse to pitch the free smack pack. However, when you split wort it often requires compromise. In this case, the result was more IBUs than Wyeast suggested because the priority was the saison. Ironically the clean half with Lallemand Belle Saison had a weird plastic flavor, so Pete and I pitched Russian River Beatification dregs to sour it (still working).

This half wasn't terrific when I bottled it 18 months ago, so I gave it a chance to improve, but to minimal avail. I achieved good acidity from Wyeast's Oud Bruin Blend (a similar blend released at the same time without Brett) in a Blackberry Beach Plum Rye Porter with 6 IBUs; I have no doubt this one would have as well if I had reduced the hopping-rate from 24 IBUs. The sour porter was one of the recipes featured in my October BYO Advanced Brewing article: Sour Beer from Extract (subscribe)! 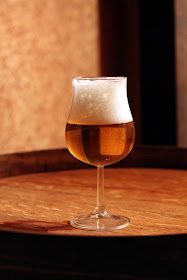 Taste – The hopping turned out to be high enough to inhibit the Lactobacillus, no acidity. The lingering flavor is strongly barnyard, smokey-nutmeg phenols. Saison-like underneath, bone dry.

Mouthfeel – Somewhat mushy, missing the acidity it needs. Strong carbonation isn’t enough to give it crispness.

Drinkability & Notes – In addition to acidity, this beer is missing the balance and subtlety that I want in a well-aged sour beer…. Not that that is what this was designed to be.

Changes for Next Time – If Wyeast ever releases this blend again, 15 IBUs or less and drink it younger… as they suggested. At bottling the Brett character was mellower, an aggressive strain to produce a noticeable character in a few months.

Topped off with 2 gallons of water in the kettle, lost more than I was expecting.

Chilled to 70F with the plate chiller. Pitched half with Belle Saison and half with Wyeast De Bom.

11/16/14 Put De Bom half on a radiator to raise temperature to hopefully assist the Lacto.

3/13/15 Bottled the De Bom half, about 4 gallons, with 88 g of table sugar. Clean half was a bit clovey-plastic-y, added Russian River Beatification dregs.