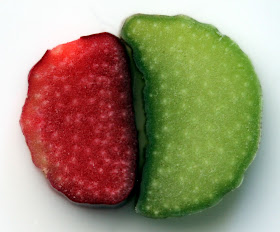 If you want to brew outstanding beer, no matter what the style, the single most important key is practice. Simple repetition is one of the biggest advantages craft brewers hold over homebrewers. My brain gets more involved researching, planning, and brewing a new recipe, but the best results usually come from tweaking, adjusting, and honing a recipe I already know!

Cherries and raspberries make for delicious sour beer, but they are distinct, overpowering, and ubiquitous. Rhubarb on the other hand is elusive, subtle, and rare in both beer and cuisine. I used it once previously, in a Rhubarb Berliner Weisse and it worked out so well I couldn't think of a better base beer to add it to!

The wort itself was diluted NEAPA wort (from one of my ugliest batches ever). The grain bill contained nearly 50% wheat and oat malts; I accidentally ran the recirculation too fast, compacting the grainbed, and pulling grain into the kettle. Once the wort hit 185F, I ran three gallons through my plate chiller, added two gallons of water to drop the gravity into the typical Berliner-range (1.030), added 13 g of 88% lactic acid to lower the pH, and pitched US-05 plus Brett/Lacto slurry from Atomic Apricot!

This is an entirely hop-free beer. Hops interfere with Lactobacillus (whether isolmerized or not), and you won't taste 3 IBUs, so why add them at all?

Six months of aging later, I racked onto about five pounds of sliced rhubarb, straight from the local farmer's market (not frozen and thawed as I did previously). I would have loved the color and slightly fruitier flavor from red rhubarb, but 95% green was all they had available. After six weeks I racked off and into a keg and for force carbonation. I tend to bottle condition Berliners, but I wanted to make sure it was ready for summertime drinking and while the rhubarb flavor was still potent. 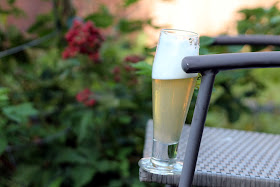 Smell – Remarkably clean for containing 12 strains of Brettanomyces! Rhubarb’s fruity-green-apple-berry flavor comes through distinctly, leaving room for a wheaty almost-pie-dough graininess thanks to the no-boil.

Appearance – Bar none the best head retention I’ve ever seen on a Berliner weisse… maybe any sour beer! Thick, dense, creamy, sticky, stark-white! Body is lightly hazed, much more attractive than its fraternal twin. With mostly green rhubarb, no stunning pink color, although there is a hint of peach.

Taste – Zippy lactic acidity (likely some oxalic as well), no acetic. About right. Rhubarb fruitiness comes through nicely meshed with light Brett fruitiness. The wheat flavor is sweeter than the nose, less raw. Doesn’t have the lemony-funk that my favorite batches have had, but it has everything else I wanted!

Mouthfeel – Light without being thin thanks to loads of protein, elevated chloride, and pre-acidifying. Carbonation is as high as I can take it in a keg with a reasonable pour, but is a bit less fizzy than if I’d bottled.

Drinkability & Notes – Timed this one perfectly for the summer! Tart, restrained/unique flavor from the stalks. Refreshing and interesting, my ideal.

Changes for Next Time – Red rhubarb would have been nice… otherwise nearly perfect as is! I'll probably go back to a less-complex Brett selection, much like adding 12 different hops or malts, 12 strains of Brett doesn't add complexity. 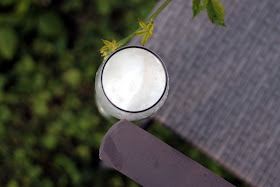 The Mad Fermentationist (Mike) at 6:35 PM