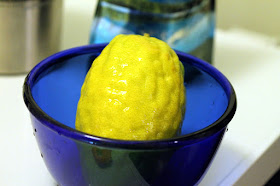 Having finally brewed Dark Saison #8 (with date and pomegranate molasses – recipe post to follow) it seemed appropriate to post tasting notes for the previous iteration, Dark Saison 7 (Recipe)! This was an aberration from my standard dark saisons, brewed with nearly 80% toasty Maris Otter (plus Crystal 55, Abbey, and Kiln Coffee).

Shortly before bottling, I infused 40 g of zest harvested from an etrog into the beer. I happened to see this giant lemon-cousin at the store and decided to give it a try. It turns out that they are more frequently used for the Jewish holiday of Sukkot than culinary purposes. The aroma was closer to lemon than anything else, but without being as distinct. 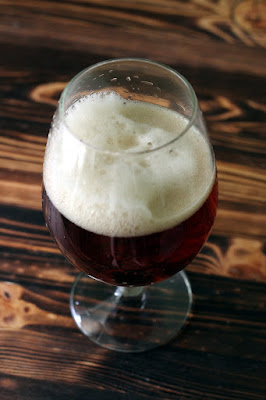 Smell – The aroma is hard to place. There is some pale-coffee and dubbel-like maltiness, damp hay, and a touch of citrusy perfume. Reminds me more of a De Dolle, than most American sours. Almost licorice as it warms, a character I've never gotten in an amber sour beer like this! Perhaps created by the microbes from Trou du Diable by way of Mark of the Yeast?

Taste – Acidity is mild, more acidity than Brett-only, but not by much. Mild red-wine-berry fruitiness. The etrog plays a pleasant role, helping to cut through the malt and funk without being obvious. The finish is a combination of funky Brett and toasty malt, lingering a beat too long. The toasty flavor has mellowed since my previous informal sensory evaluations (aka drinking a bottle for fun).

Mouthfeel – Surprisingly creamy mouthfeel for a funky saison. Thanks perhaps to the Omega Saisonstein's Monster? Carbonation is medium, could be slightly higher.

Drinkability & Notes – Weird and subtle at the same time. In the series it is most similar to Dark Funky #5 (based on Munich and Vienna), although less acidic. Etrog's contribution isn't especially distinct, but maybe that isn't the worst attribute when you are trying to make a beer without an identifiable citrus addition.

Changes – I would swap half of the Maris Otter for Pils to cut the toasty flavor. Otherwise I think it works surprisingly well for such a weird combination of ingredients! Bottle dregs could be used to replace the Lactobacillus and Brett, WY3711 or another saison strain could be used if Omega's strain isn't sitting in your fridge! 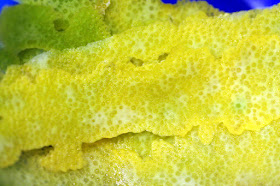 The Mad Fermentationist (Mike) at 7:29 PM