There are always new hop varieties, malts, and yeast strains begging for the attention of brewers. While it is fun to brew with each, better results often come from repeated use of a smaller subset of ingredients. Of the three, yeast occupies a unique position in that it can provide homebrewers a true house character for minimal effort.

18 months ago I brewed a hoppy wort and pitched The Yeast Bay’s Saison Blend, White Labs Brett Trois (since reclassified and renamed), and dregs from a beer conditioned with CB2. From there I repitched adding Wyeast L. brevis for a New Zealand Saison, and again for my Alsatian Saison. All three beers were delicious, but they were far from showcases for yeast character! 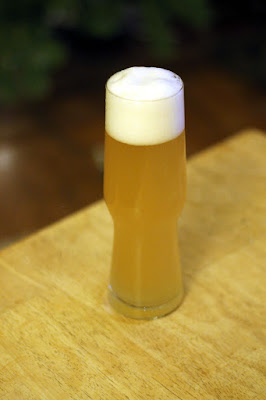 Enter this batch, the wort from my Softer and Juicier APA, minus the flame-out and dry hopping. A test to see if my house saison culture actually produces good beer when it isn’t hidden behind hops and wine!

How you harvest a mixed culture exerts a selective pressure on the microbes. I won't say my practice is ideal, I've waited until the keg kicks, poured in a pint of sterile wort, and pouring into a flask. Culturing at this late stage selects for the hardiest microbes. Likely those that are not particularly flocculant (so they don't drop out in primary), but not so intransigent that they refuse to drop out after a couple months cold!

Appearance – Nice glowing yellow body. Hazy, but far from the gray-tinged muddiness of its sister APA. Airy lemon-meringue foam perched on top. Not perfect head retention falling after half a glass, but great for a mixed-fermentation!

Smell – The nose is a pleasant mix of clove/pepper from the saison strains, and aspirin/cherry funk from the Brett. Brewed less than three months ago (and cold for the last month) so pretty impressive funkification speed.

Taste – The flavor leans more towards the bugs. Light lactic acidity (pH of 3.92), dusty Brett, and a bit of that Wyeast B. lambicus-type cherry pie. With 30+ IBUs in these batches, I doubt the Lactobacillus is responsible for the pH drop. Who knows what other microbes have joined the team after four trips through my "sour" gear!

Mouthfeel – Pillowy, especially while the head is intact. The chloride, wheat, and oats add the substance that low-final-gravity saisons (1.002 in this case) often lack. Carbonation is as high as it could be on draft (I had to pour, settle and top-off after a few minutes for the photo - 15' of 3/16" line).

Drinkability & Notes – This relatively simple batch doesn’t have the bombastic character that some of the previous beers fermented with this culture, but it has surprising balance for a culture harvested from kicked kegs. 96% apparent attenuation turned the 1.056 wort into 7.1% ABV, drinks easier than that. Once this keg kicks I'll be giving this culture another round in something else (maybe with some juniper?). I also dropped some slurry from the primary off when I visited Commonwealth Brewing, I should probably see if it ended up in one of our barrels or somewhere else?
The Mad Fermentationist (Mike) at 5:48 PM