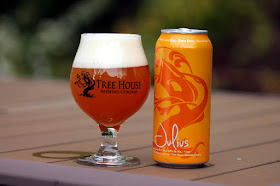 I’ve always put appearance way down the bottom of the brewing-importance hierarchy. If an ingredient or technique benefits flavor/aroma/mouthfeel, but harms clarity or color, then I’m all for it! However, even I have to admit that I may have gone too far with this batch of New-England-style hoppy pale ale.

Dry hopping during active fermentation seems to disrupt flocculation, possibly by preventing the yeast cells from linking together(?). WYeast London III (WY1318) is a surprisingly flocculant strain when massive dry hopping isn’t involved, although not as much as the White Labs Dry English Ale (WLP007) used by Trillium. Rather than wait until fermentation was mostly complete (as I have been doing), I added the first dose of dry hops on brew day while waiting for the wort to cool a few more degrees for pitching the yeast. When I was ready for my standard dry hop addition, the beer already tasted significantly hoppier than it usually does at that stage.

My wort was also high in protein as a result of a grist containing nearly 50% wheat and oat malts. Unlike flaked/rolled oats, oat malt has plenty of husk to aid in lautering, but all of that huskless wheat and beta glucans from the oats combined to form a sticky mash that caused more grain than usual to make it into the kettle. The combination of hop, yeast, and protein haze is a muddy beer, which also has one of the most deliciously hoppy characters of any beer I’ve brewed! That extra protein provided a more substantial body than my previous Soft & Juicy IPA, which included flaked corn (maize).

How much does what you see change what you taste? For some beer drinkers cloudy suggests yeasty, rough, and poorly made, while others see artisanal, loaded with hop oils, and a pillowy body. This is where narrative, marketing, and expectations come into play. For me, the level of haze I "achieved" on this batch crosses the line into murky. Not the pleasantly hazy, cloudy, but still translucent body that my favorite IPAs from Trillium Fort Point, Tree House Julius, and Tired Hands Mago Tago possess.

I’ll have a better sense of how much of the haze is hop related, and how much is from the grain once I tap the saison whose wort I ran out before adding the hop-stand addition to this batch. I also ran off and diluted three gallons of wort before the bittering hops for a Berliner. Three very different beers from one mash, an unusually productive brew day! 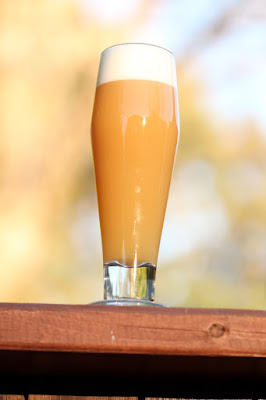 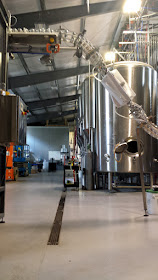 Recipe scaled to account for only the wort used for this beer.

Steeped 0 min hops starting at 195 for 30 minutes in remaining wort. Pitched slurry from Chocolate Butternut Porter (WY1318) I had stored in the fridge for two weeks and decanted. - allowed to come to 64 F during the brew day. Added an additional 2 oz of Nelson to the fermentor! After 5 hours, pitched 6 oz of thick slurry.

9/16/15 Added the second dose of dry hops as the fermentation slowed.

Appearance – This beer is many wonderful things, but the clarity is not one of those. While my Soft and Juicy IPA skirted the hazy-murky line, the addition of 13% oat and wheat malts pushed this one firmly into the murky camp. Rather than a pleasing orange hue, the greater opacity leaves this one more dull grey. Wonderful head retention and lacing, for what that is worth.

Smell – The Amarillo and English yeast successfully temper the Nelson Sauvin, smoothing the more catty edge that can be one of the big reasons it is one of the more divisive hops. The nose is mostly hops: grapefruity, juicy strawberries, and slightly dank.

Taste – There are few beers I enjoy more than fresh, hop-saturated, and moderate alcohol. Really opens up as it warms, with that distinctive Nelson "gooseberry" character coming out even more. Surprising how bitter it comes across given the light bittering charge. Malt is subdued, but pokes through with a fresh breadiness occasionally. Slightly yeasty-sulfury, but nothing like the clarity would suggest.

Mouthfeel – The switch from flaked corn to oat malt addressed the thinness that was one of the glaring weaknesses of Soft and Juicy. Proteins and insoluble fiber from the other grains are a big help! Carbonation is a bit low (having some issue with that tap), but fine by me.

Drinkability & Notes – The perfect beer for a stoneware mug... I don’t mind some haze, but this one crosses that line into muddy. It doesn’t hurt the rest of the beer’s attributes, but it is a turn off for many people I’ve served it to. I might drop the late Columbus next time around as Nelson can bring sufficient dankness on its own (as it did in my Amarillo-Nelson Micro-IPA).

Appearance certainly isn’t the most important factor, but a beer shouldn’t be unappetizing visually. I’ll probably add a protein rest next time, and some more rice hulls… 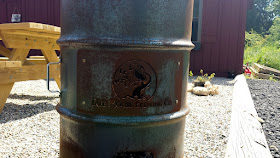 The Mad Fermentationist (Mike) at 7:13 PM