Yet another advantage of being a homebrewer, no worries if a batch of sour beer necessitates a year (or two) more aging than expected! When I brewed this red-wine-yeast-fermented Flemish Red (in June, 2011) I made the mistake of pitching BM45, a “killer” red wine strain, alongside East Coast Yeast’s Flemish Ale blend. The brewer’s yeast in the blend is susceptible to the wine yeast’s toxin, and the resulting autolysis was the most likely source of a lingering yeasty-rubbery flavor. Luckily the Brett eventually cleaned up the flavor and saved the batch! 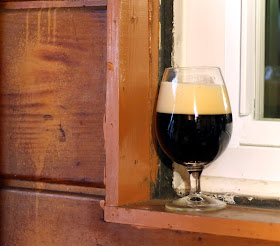 Appearance – Remarkably good head formation and retention for an aged-out sour beer. Deep Burgundy when held to the light. It is darker than many traditional Flemish Reds, more in line with Oud Bruins if not for the crimson hue. Time cleared it beautifully, which helps it appear darker as well.

Smell – Red-berry fruitiness, and some darker notes more reminiscent of dried cherries and plums. Possesses a stronger vinous character than a standard Flemish Red, i.e., one not aged in a fresh red wine barrel. Ephemeral perfume from the elevated alcohol and age, especially during the first few minutes. Otherwise no negative signs of oxidation.

Taste – The cherries from the nose are back in the flavor, pleasantly jammy. Leathery, almond, sherry, and mild milk chocolate. The sourness permeates the flavor, but isn’t heavy handed; it is lactic throughout not showing any acetic "burn." The autolytic flavors this beer battled for a couple years are thankfully gone. There is some warming alcohol, but the microbes mostly conceal it as they often do.

Mouthfeel – Medium-thin body considering the 7.4% ABV and 1.012 FG, but the acidity helps to boost the mouthfeel. Moderate carbonation, which is about right for a strong/malty sour beer. Considerably more and it would become spritzy.

Drinkability & Notes – One of those beers that I might have drank too young... before I had a thousand bottles of homebrewed sour beer piled up in the basement. There are few feelings worse than having the last bottle of a batch be the best one and that could have been the case here. Next time I try a wine yeast primary fermentation, I’ll pitch a blend of souring microbes that doesn’t include Saccharomyces!
The Mad Fermentationist (Mike) at 7:07 PM