Jacob bought me a Blichmann HopRocket a couple years ago when I started brewing test batches for Modern Times Beer (First Anniversary Party Tickets). As he was planning on having a huge hop back on the 30 bbl system, we wanted my homebrew batches to be as similar as they could be for beers like Fortunate Islands and Blazing World. Until I brewed a Pilsner a couple months ago, I hadn’t brewed a batch run through the HopRocket that wasn’t also dry hopped. That made evaluating the true impact of it difficult. 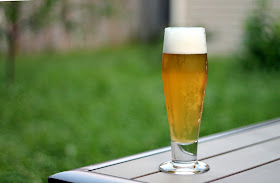 Appearance – Terrific head. Dense stiff-peaks egg white protein structure. Rises up and out of the glass initially, and doesn't drop much during a few minutes of picture-taking. Body is nearly clear, but not brilliant. I can read through the beer, but it has some haze. Guess I'll call it a kellerpils.

Smell – Hoppy - grassy and herbal. Present, but not as assertive as I hoped for with the large whirlpool and hop-back additions (4.5 oz of Perle total). Pleasant sulfur from the lager yeast (SafLager W-34/70), but otherwise clean. Grainy pilsner malt. A bit of everything, but not a lot of anything.

Taste – The flavor is classic Czech Pilsner (despite the predominantly American ingredients), more rounded than German(-style) examples. Firm, but not overwhelming bitterness that doesn’t linger. The finish is crisp grainy malt, and again slightly lagery-sulfury. It is a solid, if unremarkable, Pilsner. Very fresh and vibrant compared to most imports, but not nearly as hoppy and dry as my favorite American examples like Victory Prima, Tröegs Sunshine, and Moonlight Reality Czeck (obviously).

Mouthfeel – Fuller than I expected, especially given the starting gravity. Not chewy, but it doesn’t have the snap I look for in the best Pilsners. Carbonation is solid, about all 10 feet of line can muster without pouring half foam.

Drinkability & Notes – Solid, clean, composed, pleasant, but not mind-bending. Not that there’s anything wrong with that. I wasn’t trying to brew and IPL, but I wanted the Perle to jump out of the glass a little. Nice to have a beer on tap I can serve to my neighbors without having to give a long explanation though. Next time I'll drop the mash from 153F to 150F to help dry it out (and up the hops too!).
The Mad Fermentationist (Mike) at 8:55 PM