I've been so distracted with the book release and trip, most recently to the 2014 National Homebrewers Conference in Grand Rapids, that this batch of Earl-Grey-tea-infused dark mild was ready to review before I posted the recipe. So here's a two-in-one recipe and tasting notes spectacular!

A couple months ago, Audrey and I were at a holiday party at our friends Bill and Christie Newman's house. They had a wonderful homebrewed English dark mild on cask that had an ever-so-faint tea-like aroma produced by the combination of English hops and malt. Audrey was so taken with the flavor that she requested we brew something similar, but with actual tea. She selected Earl Grey to add some citrus notes along with the herbal black tea. Sounded good to me, I'd had a sample of Namaste Brewing's gold-medal-winning Bitterama at GABF 2013, which was delicious, but a bit more potent (in terms of both alcohol and bergamot) than what we wanted to have on tap. 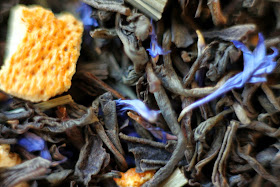 Over Memorial Day weekend the two of us drove to Charlottesville, Virginia for our first anniversary. We visited Blue Mountain Brewery, South Street Brewery, Albemarle Ciderworks, and drank plenty of other great local beers from the likes of Three Notch'd and Champion (not to mention visiting Montecello, and hiking up to Humpback Rocks). During the drive south we stopped for lunch in Fredericksburg, VA and to walk around the Civil War battlefield. While waiting for a table at Foode, we walked across the street to PA Dutch General Store, which had a huge selection of herbs, spices, and teas. After smelling all the options, we opted for Russian Earl Grey which adds lemongrass, Spanish orange, and what looks like hyacinth flowers.

On brew day, a few weeks earlier, I'd guided Audrey in picking malts for the base beer by eating specialty malts leftover from previous batches. At the moment Golden Naked Oats are tricky to get hold of, but I had a half pound remaining from a funky/hoppy saison. The goal was moderate hop bitterness from a single addition of Czech Saaz.We opted for White Labs English Ale WLP002 (similar to Wyeast 1968), because it leaves plenty of residual body, but not too much fruitiness.

As when using most ingredients for the first time, I opted to dose the tea into the beer to taste post-fermentation. In this case it took about one ounce of Earl Grey steeped in three cups of near-boiling water for a short three minutes. An extraction avoids over-doing a new ingredient and provides a brighter "truer" flavor compared to additions earlier in the brewing process where fermentation can scrub out aromatics. For more details, see this post on my floral gruit from a few years ago.

Coincidentally I have an article in the most recent issue of BYO (July/August 2014) titled: Experimental Homebrewing: Approach Unconventional Beers with Confidence. It covers using culinary ingredients and techniques in brewing, and is a bit more fun than some things I've written recently. I'll be continuing to write articles for them, so subscribe if you haven't already (use that link and I get a cut)! After seeing them talk at NHC, I'm also excited to read Drew Beechum and Denny Conn's forthcoming book Experimental Homebrewing!

Appearance – A bit murkier than I expected, especially considering the high flocculation of the Fuller's yeast strain (WLP002 – English Ale). Likely the combo of oats and rye specialty malts are to blame. On the dark end of English Mild, leathery brown. Puts up a small off-white head, the carbonation is low, and the head sinks rather quickly. 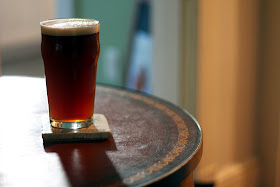 Smell – Notes of citrus (not fresh juice or zest – more single tone), not potent enough to definitively say "bergamot" or "Earl Grey." Sweet caramel maltiness behind that with mild yeast fruitiness. Pleasantly citrusy-herbal-malty, not too weird.

Taste – The flavor starts out toasty malt, stops by mild black tea in the middle, then finishes almost roasty. There is a restrained sweetness and minimal hop bitterness. Nicely balanced, smooth, and rounded. I'd like the malt to be a bit more direct rather than bouncing around, didn't need the complexity with the tea already.

Mouthfeel – Medium-light body, low carbonation. Ideal for the style, and solid mouthfeel for such a low alcohol beer.

Drinkability & Notes – The Earl Grey tea ended up about where we wanted it, present, but not dominant. It layers nicely with the caramel-maltiness of the complex grain bill. It drinks well for being about 4% ABV, has enough maltiness that I don't think about it tasting watered-down.

OG was at 1.044 at the end of the boil, so we added.5 gallon of water to get the gravity to where we wanted it.

Chilled to 68F, racked clean wort, leaving 1 gallon behind, pitched the yeast directly from the tube, shook to aerate. Left at 65F to ferment.

5/30/14 Dosed with 3 cups of tea brewed with 1 oz of Russian Earl Grey tea from PA Dutch General Store. Used a French press, dosed in stages, mixing and tasting until the flavor was where we wanted it.
The Mad Fermentationist (Mike) at 8:25 PM