The sour brown I'm drinking now was the third and final beer aged in our bourbon barrel, which will be onto its new life aging Nathan’s beers at Right Proper, when they open later this fall! The barrel started life aging a wee heavy, but after heading sour we rolled with it, adding bottle dregs from sour beers. The base for this cherry-spiked version was a slightly lower-gravity recreation of that initial wee heavy.

I’ve always wanted to know what microbe(s) are in that bourbon barrel. It does such nice things to stronger-darker beers. Luckily Nick of The Yeast Bay agreed to take a look at the dregs (along with trying to isolate the Brett from De Dolle Oerbier Special Reserva for me). If he can get something, it should be a good microbe for the second use spirit barrels at Modern Times after the Imperial Porter et al. have drunk their fill. 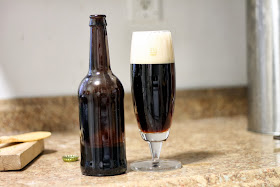 Appearance – Great head retention, especially for a sour beer. It leaves dense, creamy, off-white lacing behind. A quick glance returns an impression of a russet beer. Holding it up to the light reveals the beers true color, beautiful crimson.

Smell – The first whiff I get is toasted malt and subtle oak, but those are followed by a vibrant fresh sour cherry. The fruit is balanced by a subtle earthiness, but this is not a beer that showcases Brettanomyces’ character. The flavors extracted from the bourbon barrel are much subtler than they were on the previous two batches, but hints of vanilla emerge occasionally.

Taste – Firmly sour, but like the other beers from this barrel, the flavor is not overly dry. This balance works well with the rich bready maltiness. The cherry flavor comes on in the mid-palate and continues into the finish. Juicy. The wood character melds with the fruit, but takes a backseat. Not a beer resplendent with complexities, but the flavors that are there are complementary and potent. Still tastes very fresh, despite having been brewed two months short of three years ago.

Mouthfeel – Full, but not sticky or cloying like some high gravity Flemish reds/browns. Medium-low carbonation suits this beer well, much higher and it could take a turn towards the harsh.

Drinkability & Notes – As with the non-fruited version, I’m really happy with the way this one turned out. I’ll be sad to see our little barrel crew disband in the next few months, but I’ll have beers (and friends) to remember it by for a long time!
The Mad Fermentationist (Mike) at 7:56 PM