I thought it would be fun to walk everyone through a typical batch on the small Modern Times system (if you follow me on Facebook or Twitter, you probably saw a lot of this already). During my two months working at the brewery, I brewed on the ~23.5 gallon pilot system about 15 times. Some of those batches were true recipe pilots intended for eventual scaling, while others were experiments, or food for our souring microbes. 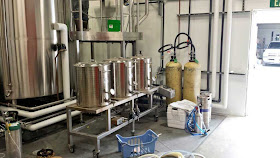 This will probably be a bit more practical than the production batch brew day walk through! I know there are homebrewers out there with systems that are similar to this one, but there are a few neat things we are able to do at a brewery that no one has at home. It is much more advanced than my usual rig. The stand was built by a local homebrewer (John McKay), and he outfitted it primarily with components from Blichmann Engineering. He's built several similar systems, including one that Coronado Brewing uses for their pilot batches.

The mill is the same one I use at home, a drill powered Barley Crusher. It would certainly be nice to have a mounted and motorized mill, but this one gets the job done. Base malt is usually easy to come by, but I did my best to avoid taking sacks of malt that were earmarked for an upcoming production batch. If we had a specialty malt on hand for I'd take a few pounds, but for anything else a trip to the local homebrewing store (Home Brew Mart) was required. 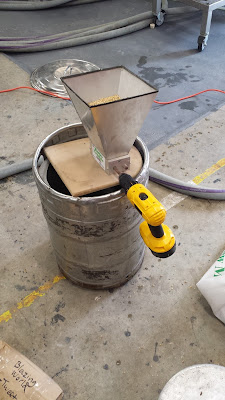 The system came with a propane regulator and burners, but my first job was to switch it over to natural gas. Natural gas is much less expensive and doesn't run out or lose pressure like propane. The pressure is lower though, so it requires a larger diameter hose to produce the same amount of heat. After getting accustomed to how easy it was to deal with, I'll certainly be switching my homebrew system to natural gas when I get around to overhauling it. 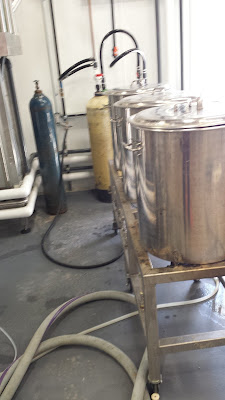 Here is the empty 30 gallon mash tun with false bottom. Rather than the manifold I use, this is piece that separates the wort from the spent grain. Seemed very effective, no stuck sparges, even when using a high percentage of oats or wheat. Brewhouse efficiencies hover between 75-80%, pretty good considering how hoppy many of the beers we brew are. 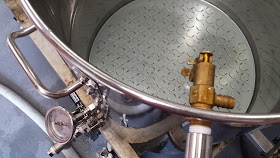 Rather than starting with cold tap water and using the burner to heat it to the strike temperature, we can simply steal hot water from the brewery's hot liquor tank. It can be heated slightly more, or mixed with cold water as needed to achieve the target temperature (about 10 F above the intended mash temperature, with a 1.3 qrts/lb ratio). The large diameter hose helps speed things up too. 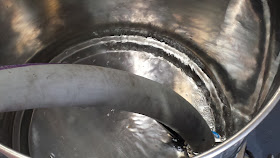 After mashing in, we insert a temperature probe into the thermowell and set the associated controller to the target mash temperature. When the temperature falls below the set point, the controller opens a valve that allows gas to flow to the burner (ignited by the pilot light). The march pump circulates the wort continuously from under the false bottom and back into the top to prevent the wort from scorching.

A second temperature probe measures the temperature of the wort flowing out from under the false bottom. The goal is to run the pump fast enough that this temperature closely matches that of the mash itself. The pump on the right is only for water, while the one on the left is for wort. 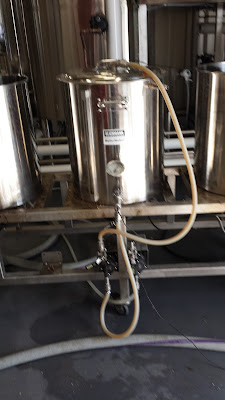 After a 45 minute rest (the wort has been recirculating this whole time, so there is no need for additional time spent vorlaufing), it is time to sparge. A few minutes before the rest is complete, the brewer fills the pilot's HLT with hot water from the brewery's HLT. The system is equipped with an AutoSparge, which operates with a float (similar to a toilet's tank). Rather than rely on it, I tended to match the flow in from the HLT with the flow out to the kettle, using the AutoSparge as a safety in case I got distracted and wandered off. 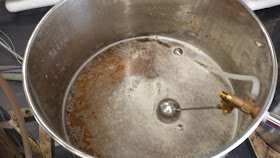 Here is the control panel with its two Love controllers and a bunch of switches (from top to bottom they control the main power, temperature readouts, gas valves, and pumps). While it was nice to have all this automation, it also makes life more complicated when something stops working. For my last couple brews the controller responsible for the mash tun stopped reading correctly, meaning I had no way to turn that burner on. Luckily with 20 gallon batches, you don't lose more than a couple degrees over the duration of the mash rest. The issue may have been the probe, with all the heat and water the risk of damage to them seems substantial. 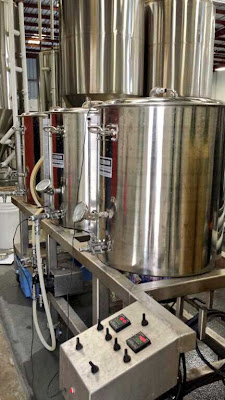 Empty boil kettle with HopBlocker. No pouring the wort through a sieve like I do at home, this inverted metal cup prevents most of the hops (even pellets) from being transferred out of the kettle after the boil. 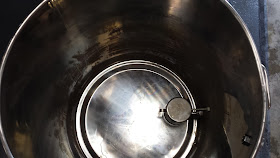 Here's a rolling boil with some good hot break. At most we aim for 23.5 gallons post-boil, which means starting with about 26 gallons (accounting for evaporation, and losses to trub). Hops came either from the commercial stock, homebrew odds-and-ends, samples, or were specifically purchased if we needed something we didn't have on hand. After the boil ends, we manually whirlpool the wort, and then allow it to settle for 20 minutes before running off. 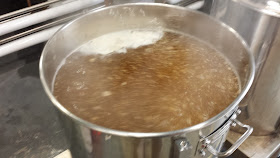 Knocking out wort into one of the four insulated 27 gallon More Beer conical fermentor. Impossible to see in the photo, but chilling water comes through a pipe connected to the cold liquor tank, which always has water held in the high 40s F. The CLT pump really shoots water out through a 1/2" opening, so I needed to pin the hose carrying the spent water to prevent it from whipping around. Makes knocking out 20+ gallons of wort quick, usually15-20 minutes. There is a slot to insert one of the probes to monitor the temperature of the wort as it exits the chiller. 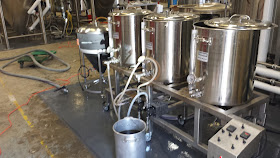 When it is available, we take a few cups of dense yeast slurry from one of the yeast brinks, or big fermentors. Barring that, we'll either make a starter, or when pressed for time... buy a whole bunch of White Labs vials.

The cold boxes are set to around 40 F to store kegged beer, which is too cold for fermentations. The solution was to attach a heat bands to each fermentor, then cover in adhesive-backed foam insulation. A Ranco temperature controller probe inserted through a thermowell turns the heat on when the temperature falls too low. We were actually having the opposite problem when I left, with a nearly full fermentor, and booming fermentation, the insulation was actually too effective, trapping so much heat that the temperature would climb into the mid-70 F. A cooler knock-out may be the solution, setting the temperature in the low 60s F initially, allowing it to climb to the high 60s F on its own before ramping up the setting on the temperature controller to hold it there.

I also learned the valuable lesson about the heat bands. The first batch fermented set to medium, which was enough heat to cook the krausen onto the inside of the conical. That was not a fun hour of scrubbing. 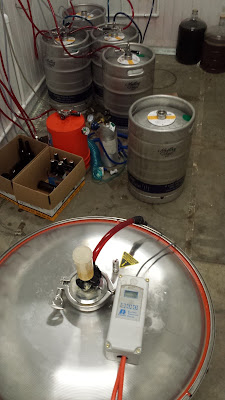 After emptying and scrubbing out the boil kettle and mash tun, we flush the plate chiller with a hose, and then run hot water plus caustic through it. While that was running for 15 minutes, there is just enough time to clean the floors (floor drains are another big help). On good days I went from milling grain to completely cleaned up in about five hours, not too bad for quadruple the volume I brew at home! 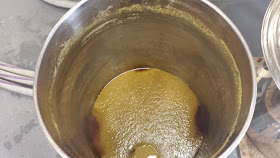 After fermentation is complete, we turn off the heat wrap and allow the beer to crash cool. When it is ready to keg, we attach a hose to the racking arm, rotate it up, and push with a couple PSI of carbon dioxide pumped in through a bayonet affixed to the top of the conical. Makes it easy to transfer wort, no pump to prime, and less exposure to potentially damaging oxygen. Then it's as easy as shake carbing and attaching the liquid out to one of the taps in the tasting room! 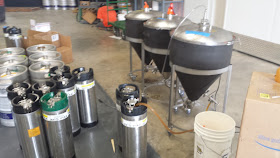 The Mad Fermentationist (Mike) at 7:12 PM