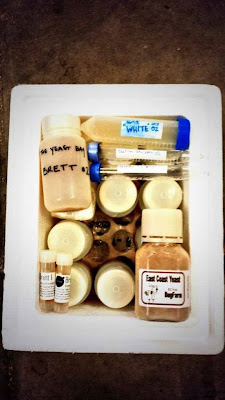 With only three weeks to go before I leave San Diego, we're really kicking the sour beer program into first gear. I've got 15 cultures growing, and another 20 waiting in he cold box. The newest delivery was from Jeff of Bootleg Biology. While some of his cultures are from the usual place (bottle dregs) he also sent microbes he isolated from kombucha, wild honey, and his backyard in Arlington, Virginia. They should add some nice biodiversity to our microbial holdings.

We're talking to a couple wineries and brokers about buying barrels, but haven't actually purchased any yet (that should be coming shortly). Ideally we'd prefer the place to be within driving distance so we could go, inspect the barrels, and drive back with them. Buying only as many as we need at a time for only one batch. We'll see if that happens. We've also got barrel racks on order (pretty reasonable at $36 each, including shipping).

Over on the Modern Times blog I have a post about the four initial base beers we'll be brewing, including complete recipes for each (although the Halltertau hops are just a placeholder for whatever we end up using). The post includes some basic thoughts on the sorts of strains we'll pitch into each, and how we might go about flavoring them once they are soured. Luckily getting all my hard work out of the way this trip, can't wait for subsequent trips to San Diego that will focus on the fun stuff: blending and adding fruit etc.

While the barrel-aged beers won't be ready for at least a year, we're considering a few stainless fermented sours that should be ready sooner. I have a couple cultures growing from the microbes living on malt (Lactobacillus mostly). These will go into a "quick" sour ala my sour-worted brown. We'll split the 20 gallon test batch of reddish wort to see which culture produces the best results (including a Wyeast Lactobacillus as the control). When the target sourness is reached, as determined by tasting and pH readings, we'll use heat to kill the bacteria before doing a 100% Brett fermentation. Should produce an interesting, tart, complex beer in not much more than a month.
The Mad Fermentationist (Mike) at 10:08 PM