Inspiration is impossible to control. Sure you can sit down with pen/paper or brewing software and try to come up with a great recipe idea, but in my experience that usually results in gimmicks or repetition. You never know when you’ll be struck with a really good idea. For me, unsurprisingly, it is often while drinking a delicious beer or reading about brewing, but that isn't always the case. For example, this batch was conceived while sucking on grapefruit cough drops to fight a sore throat (not nearly as weird as the story behind Evil Twin's Soft DK...).

After the bolt of inspiration that brings the recipe concept, it is the time to sit down to focus on defining the target characteristics and writing a recipe that will achieve them. In this case I wanted some bitterness, subtle sweetness, bright citrus aroma, and crisp balance. I considered using a sour beer base, but grapefruit has bitterness too, so I ended up choosing a pale ale. I also wanted something I could turn around quickly. 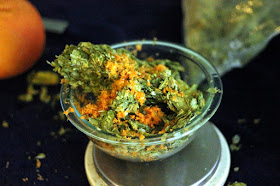 I selected American "2-row" brewers malt, to impart a clean/crisp malt underpinning. I didn’t want a big caramel flavor, so I opted for a small amount of CaraVienna for a hint of sweetness. The only other specialty malt was acid malt, and only enough to lower the mash pH, and hopefully add some crispness to the finished beer.

While "grapefruit" is a common descriptor for the aromas of numerous American hops, there are a few varieties that standout. I selected the two I associate with the flavor most, loading in Cascade and Chinook at a 2:1 ratio. I didn't want to only rely on the hops alone though, so I mixed the zest harvested from four ruby red grapefruits into the dry hops. Audrey and I then peeled the fruit (discarding the pith), bifurcated each globe, stabbed each half a few times, and dumped all eight into the wort. 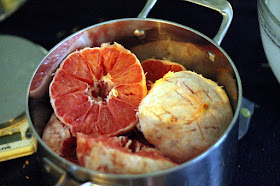 The idea of a hoppy beer with citrus has been done before: Tyranena Scurvy IPA (orange peel) and Hill Farmstead-Tired Hands Delicado (lemon zest) for example. Sadly I've never had the chance to try the special grapefruit'ed version of Sculpin IPA from Ballast Point, which draws rave reviews. In my recipe I'm hoping for enough grapefruit aromatics to show through for the citrus to be identifiable, but not enough to obscure the fact that this is a firmly-hopped pale ale.

The dry hops and grapefruit only went into the beer yesterday, so I’ll give them about a week to infuse before I keg and force carbonate. Hopefully it’ll be one of those "I can’t believe I didn't think of this before!" sort of results. I won’t have long to enjoy this batch though because I’m less than three weeks away from flying to San Diego for the summer. Hopefully it'll last Audrey until I return!

It would be fun to try something similar with piney hops and spruce tips as well, but that will have to wait until next spring.

Made a 1 L starter the night before, yeast pack was 5 months old.

2 g of gypsum added to the mash and sparge. Filtered DC water, un-cut as the base.

Chilled to 70 F, shook to aerate, pitched the whole starter, and left at 64 F to ferment.

6/2/13 Added the zest of 4 grapefruits plus the dry hops in a weighted bag. Added the 4 peeled and cut in half grapefruits to the fermentor too.

6/20/13 Happy with how it turned out, although the grapefruit isn't as potent as I had hoped for.
The Mad Fermentationist (Mike) at 6:04 PM