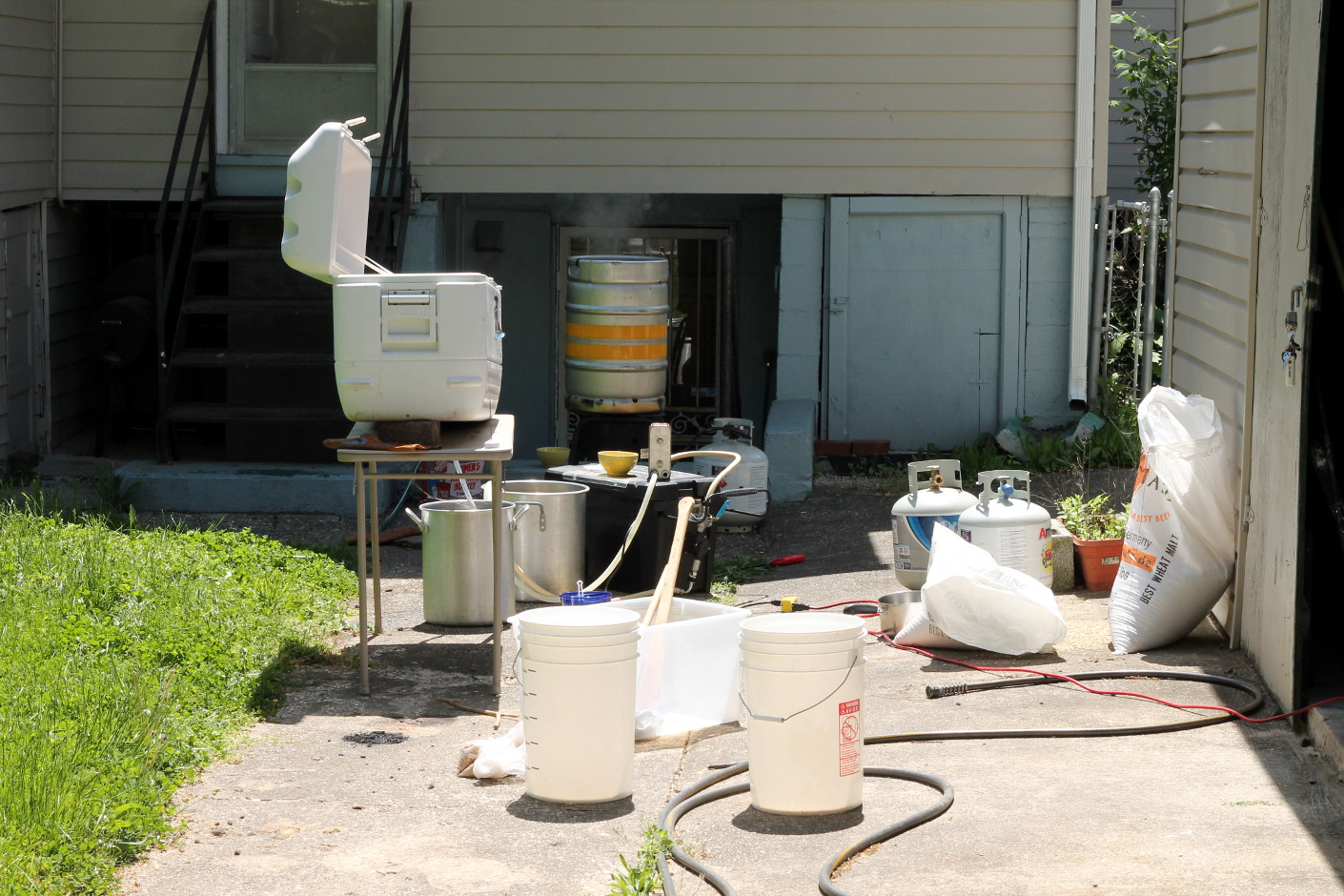 More than three years after initially filling the red wine barrel in my basement with a pale lambic-ish wort and inoculating with a pre-East Coast Yeast test culture of Al Buck’s Bugfarm, Nathan and I are finally preparing for our first true solera pull!

In September 2011 we pulled the first 20 gallons from the barrel, but that was solely the unblended initial fill. After refilling the barrel and allowing it to age until now, the blend is comprised of approximately 60% of the initial beer (3.25 years old) and 40% of the first refill (1.7 years old). The result is a sour beer with an average age just over 2.5 years (for more on calculating a solera's age, download my recently updated solera spreadsheet). Judging both by that advanced age and the flavor of the sample we pulled Saturday, this should be a delicious pull! 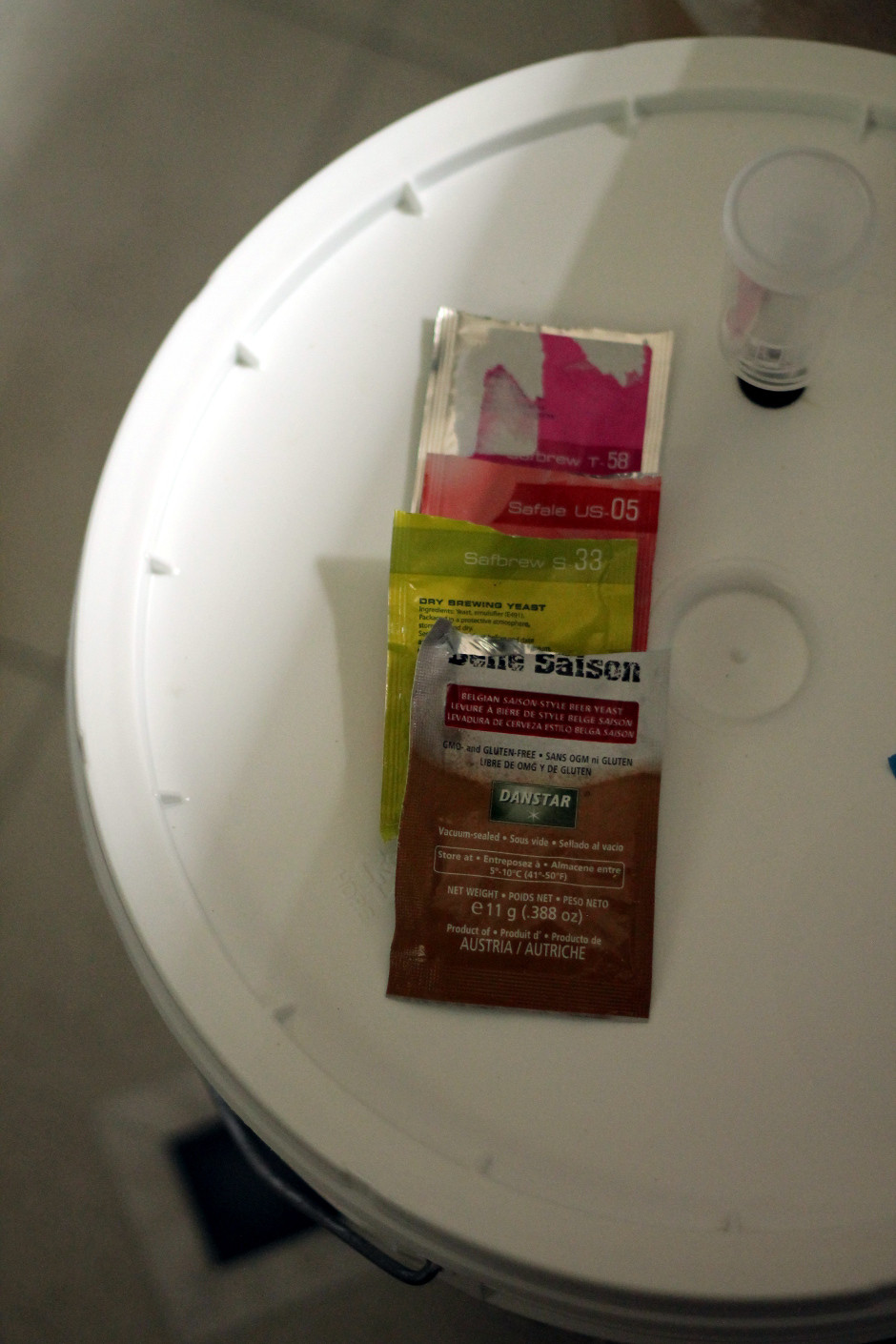 When we refilled the barrel with unfermented wort last time, it took almost a week to see the first signs of active fermentation. There isn’t much chance for anything really unpleasant to happen when wort is mixed with double its own volume of already soured/alcoholic beer, but it still didn’t seem ideal. For this refill we decided to ferment the beer before racking into the barrel. We used every available fermentor, including my two 20L American oak barrels, to ferment the wort. The five fermentations are currently raging with a variety of dried yeasts: T-58, S-33, Belle Saison, and US-05. I’m especially interested to taste the Belle Saison.

Several people have asked if we are concerned about autolysis (i.e., off-flavors resulting from yeast death). My answer is, “Not yet.” Gueuze producers sometimes age lambic in the primary barrel for up to four years. I doubt they would ever have autolysis problems because after that long there wouldn’t be any Saccharomyces left alive (oxidation is another story). The concern with a solera is that as the trub continues to build with each successive fill it could eventually cause issues, as Cambridge Brewing Company discovered with their Cerise Cassée project. It may also be that as beerstone builds up reducing the wood's porosity the Brettanomyces is no longer able to clean up the compounds released by the primary yeast. Moving to primary fermentation outside of the barrel should also help, assuming we provide enough time for most of the yeast to drop out of suspension before racking into the barrel. We'll siphon out some of the trub during pulls too.

I’ll have another post in a couple weeks to recap how we treat the beer we remove from the barrel. Nathan and I had great luck with our four variations on the first pull (plain, Hallertau, elderflower, and Cabernet sauvignon), but we probably won’t repeat any of those this time.

Our other solera (that lives in an apple brandy barrel) is ready for its second pull as well. It is just barely holding on, pushing the upper level of my tolerance for acetic acid. Luckily topping off the barrel and getting an air conditioner to hold the ambient temperature in the 60s F prevented it from becoming undrinkable since the first pull.

With the coming decommissioning of the group barrels at Nathan’s house and our respective jobs in the professional ranks coming, we’re hoping to keep these two soleras going, but we’ll see.
The Mad Fermentationist (Mike) at 7:42 PM