I get lots of brewing ideas. Sometimes they work out pretty well (for example Modern Times is about to brew 1,000 gallons of my 100% Brett Trois IPA!), but that isn’t always the case. Last summer I had the crazy idea to ferment half a batch of Berliner weisse with nothing but Lactobacillus. My initial concern was that the resulting beer might be too sour, but I figured that could be handled in a variety of ways (like blending with the other half of the batch), but that wasn't the case. Appearance – Slightly hazy, but considering the single infusion mash, and lack of a boil, not bad. Probably the palest beer I’ve brewed, about the color of “real” lemonade. The bright-white head has solid retention and leaves sticky lacing.

Smell – Smells pretty clean compared to my usual mixed-fermentation Berliner weisses. None of the musty, floral, complexity that Brett usually brings. The rest of the components are there though, wheat and gamey Lacto.

Taste – The flavor is where it falls a bit flat. The acidity suggested by the Lacto-y nose doesn’t show up. Otherwise solid, but like a light American wheat beer. Slightly doughy, with some lemon, and low levels of spicy phenolics. Sweeter than I want my Berliners to be, even considering the lack of acidity.

Mouthfeel – Relatively full body for a 1.032 beer, I’d prefer it crisper. Good carbonation, right after opened it had some foam build in the neck, but it seemed to dissipate quickly.

Drinkability & Notes – I’ve read a lot of complaints about the White Labs Lacto strain over the last year, but in this case there aren’t any excuses I can make for it. It was allowed to work without competition, in a low gravity/IBU wort, for nearly a year. I might try a blend of White Labs and Wyeast Lacto next time, or just try out one of my other ideas! And heck, at least I did something (ferment a beer without yeast) that very few people have done before.

Sorry for the long delay since the last post, but Audrey and I got married Thursday! Sadly blog posts the next few months may be a bit sporadic with my trip to San Diego and a deadline for my book both coming up in about a month. 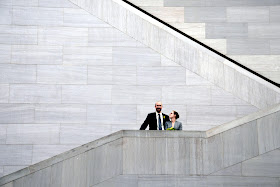 Photo by Julia Benton at the National Gallery of Art.

The Mad Fermentationist (Mike) at 9:17 PM