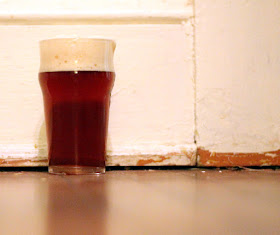 The recipe for Blazing World, Modern Times’ amber IPA, has stood out as a unique challenge. All three of the batches have been pretty good, but none has yet achieved that magical combination of dank hop aromatics that we set out to create. Every batch has lead with Nelson Sauvin, and included some Simcoe backing, but varied the hop in the middle. We started with citrusy Ahtanum, moved to surprisingly fruity Columbus, and now to Palisades for this third batch. For the Love of Hops suggests Palisades as a good compliment to “special” hop varieties, like Simcoe and Nelson, but we selected this lesser-hyped American variety for its unique floral-dank aromatics.

Appearance – Very clear amber-orange. It might be slightly paler that the second iteration (resulting from the switch from a Vienna to a pale/Munich base, and dropping the C120). Slight haze, but pretty clear for a dry hopped beer. It has beautiful head retention and lacing, a sticky white head.

Smell – This version really pushes that signature Nelson Sauvin melon-dank aroma. Abounds with similarities to what Alpine achieves with Nelson Sauvin and Southern Cross in their Nelson (one of the beers that inspired us originally). Maybe because the pellets did much better loose than the whole Simcoe and Palisade compared to previous batches when all of the hops were bagged and weighted. Not much else other than hop coming through, clean fermentation for all I can tell.

Taste – The flavor is more balanced than the nose. Still a prominent hop character (mango, pine, and that classic Nelson stank) but also mild toasted bread crust. After the resiny-bitter finish there is just a hint of coffee from the pale chocolate malt. Drier than previous batches, but that really brings it inline with the West Coast IPA balance.

Mouthfeel – Moderate body, heftier than many IPAs, but certainly not thick. Carbonation is slightly prickly, which is about right for this one.

Drinkability & Notes – The bitterness is close to spot-on for my tastes, but I could see dialing it back slightly to make it more drinkable. I’m pretty happy with this batch, it is the closest to our original goal of a dank amber IPA, but it isn’t quite there. I’d like to see it leap out of the glass a bit more, which is hopefully where Mosaic we plan to use in the next batch will come in handy.
The Mad Fermentationist (Mike) at 10:02 PM